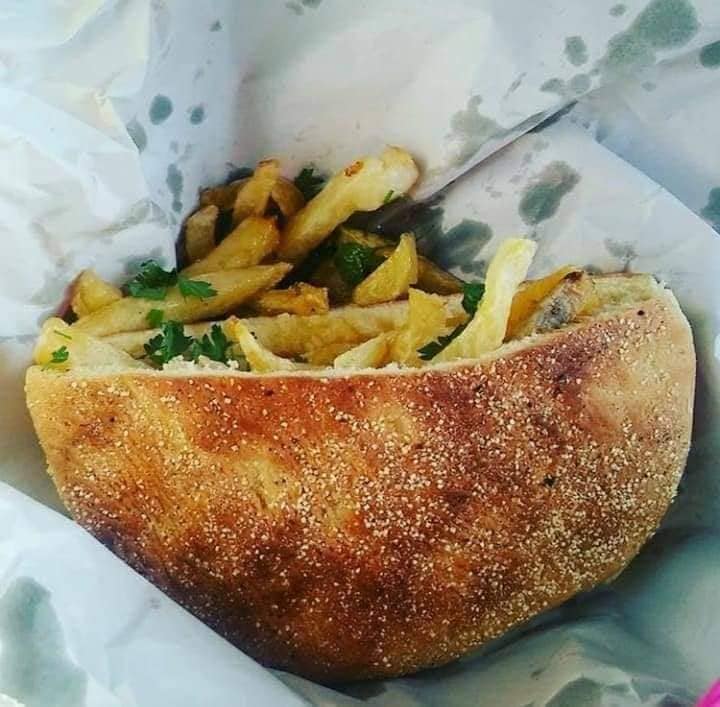 Tunisian street food is one of the most underrated in North Africa. The country overflows with unique and iconic street foods so dearly loved by Tunisians everywhere.

The most common type of street food you can find is sandwiches. They are everywhere; from random little fast food shops around the corner to the menus of Tunisian fast food chains.

One thing is for sure, they are deeply engrained in Tunisian culture.

Probably one of the most popular sandwiches, the Kaskrout Tounsi takes its name from the French “Casse-croute” which means cuts hunger and its name literally translates to Tunisian sandwich. This is a staple of Tunisian street food.

Its ingredients can be found in every Tunisian household and that is probably why it holds the name of the country. It is very simple to prepare and you will only need:

Almost as famous as the Kaskrout Tounsi, Kasrout Kafteji is also a staple of Tunisian street food. It is the on-the-go version of the Kafteji dish. Made of fried vegetables namely peppers, tomatoes, pumpkin, potatoes and adding a fried egg at the end.

The kaskrout kafteji differs from the main Kafteji dish simply in the format as the mixture of vegetables is put into a piece of sliced bread to turn it into a sandwich. Of course it would not be a Tunisian street food icon without adding harissa.

Typical to Bizerte, this sandwich is only found there, although the dish from which it is taken is served everywhere in Tunisia. Just like the kaskrout Kafteji, Kkasrout lablebi is the on-the-go version of the Lablebi dish.

Composed simply of boiled chickpeas, salt, cumin and of course harissa, it is common to add olive oil or Tuna. This sandwich became an attraction in Bizerte as it is mandatory to have one when visiting the region.

Definitely of one the most popular Tunisian sandwiches. Chapatie is a type of bread consists of a fairly dense though slightly risen disc about 5 inches in diameter.

The sandwiche is usually filled with an Omelet (egg, parsley, onion) with some Harissa, pepper, cumin, and cheese as well as Tuna fish.

By far, one of the most popular Tunisian sandwiches. Mlewi is a kind of “puff pastry” or pancake, it is a flat unrisen type of bread.

A pure Tunisian delicacy, usually appreciated by everyone. It is Tunisia’s go-to fast food sandwich.

Malfouf is a Tunisian Street food sandwich, made with a leavened, oven-baked flatbread and stuffed with Tuna, Omlette, onions and all kinds of raw vegetables chosen as per your choice.

In recent years, Makloub has undoubtedly become the favorite sandwich of Tunisians. Pizza dough, cheese and a few ingredients were enough to make this sandwich the unanimous success.

Popular in the South of Tunisia but it is gaining popularity pretty much everywhere in the country, Mtabga consists of a bread that has two thin and small 7 inch diameter circles without oil and yeast.

Usually filled with a paste consisting of onions, tomato, spices, dried red pepper and sometimes some red meat. This is painted on one side and sealed around the edges and cooked in an oven.

Small oval shaped fried dough, the fricassee is the perfect little snack to have when you get a bit hungry during the day.

Split in two and stuffed with potatoes, hardboiled egg, tuna, black olives and the necessary harissa, the fricassé is found in every region and every street in Tunisia.

Fan of Tunisian Cuisine, looking for some Authentic Tunisian Recipes?

In search of Tunisian cuisine, through a series of articles/videos, Carthage Magazine offers a window to the Tunisian food and recipes through the #TasteTunisia initiative.