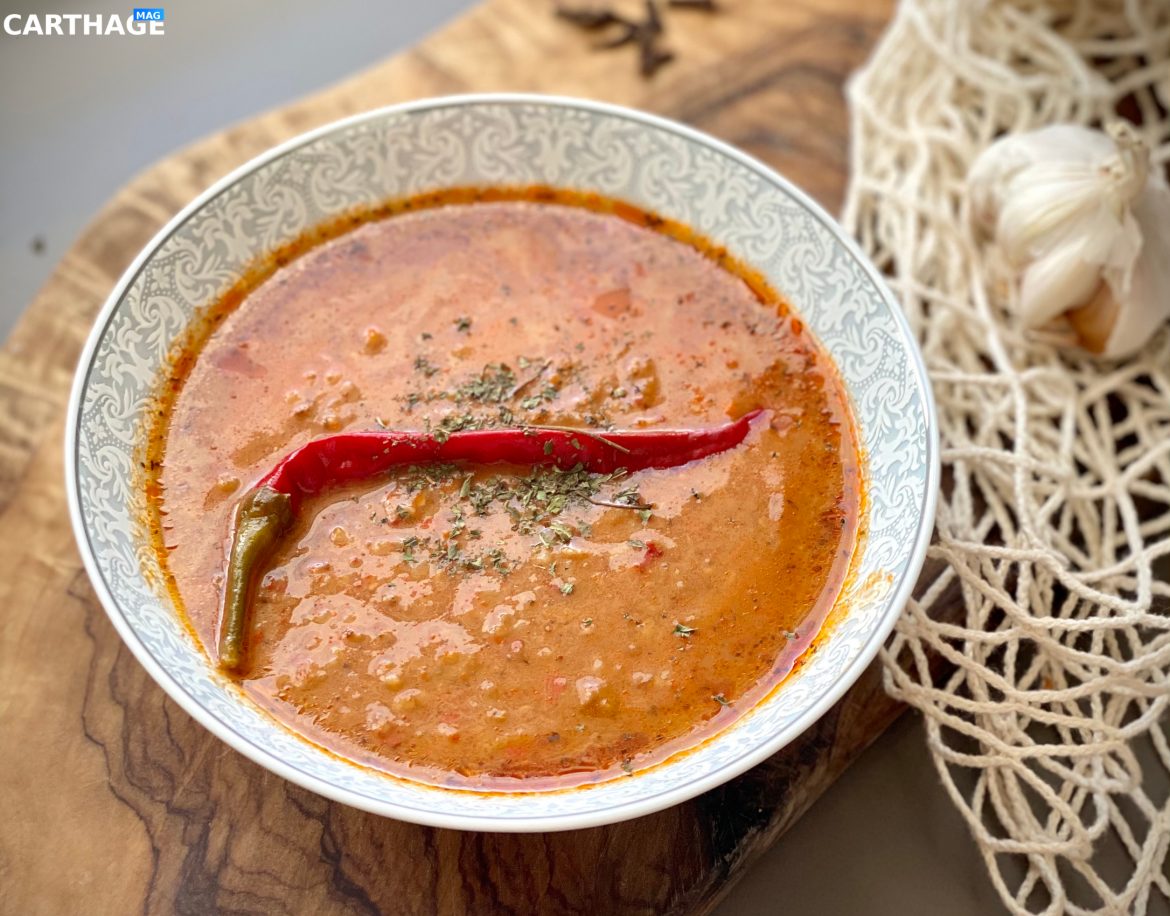 The Tunisian Octopus Barley Soup “Tchich” is a tomato based soup that has tender pieces of octopus and finished with dried mint. It is usually made in weddings, and a lot in Ramadan. Some use squid instead of the octopus. Regardless, it is really good and worth trying.

Ramadan is here, one of the best months of the year. Ramadan is a blessed month that comes yearly in which Muslims all around the world fast from dawn till sunset. Muslims break their fast with water, and a couple of dates. Then we move on to soup which is perfect because it is warm and easy on the digestive tract.

Each day Tunisians make different soups and one of the country’s favorite is “Tchich Bel Karnit” – Barley and Octopus soup.

It is a tomato based soup that has tender pieces of octopus, small grains of cracked barley, and finished with dried mint. It is usually made in weddings, and a lot in Ramadan. Some use squid instead of the octopus.

Regardless, it is really good and worth trying. Next time you find some fresh octopus in the fish market, grab some to make this soup. You can also make the Tunisian seafood salad with octopus.

How to Cook the Tunisian Octopus Barley Soup

This Tunisian Octopus Barley soup recipe is part of the #TasteTunisia initiative. In search of Tunisian cuisine, through a series of articles/videos, Carthage Magazine offers a window to the Tunisian food and recipes.

Rahma is an international registered dietitian/nutritionist and a certified yoga instructor. She graduated from Cornell University in New York and finished her dietetic internship at the University of Virginia Medical Center. She is a food lover and has a deep passion for healthy living while being authentic to your heritage. She worked in many countries and loves to recreate traditional food with a healthy twist. She aims to inspire people to live balanced and healthy lives, both physically and mentally - basically the best version of yourself. She loves cooking (obviously), reading, yoga, chocolate, and watching movies.

Aziza Othmana: One of the Most Iconic Tunisian Princesses