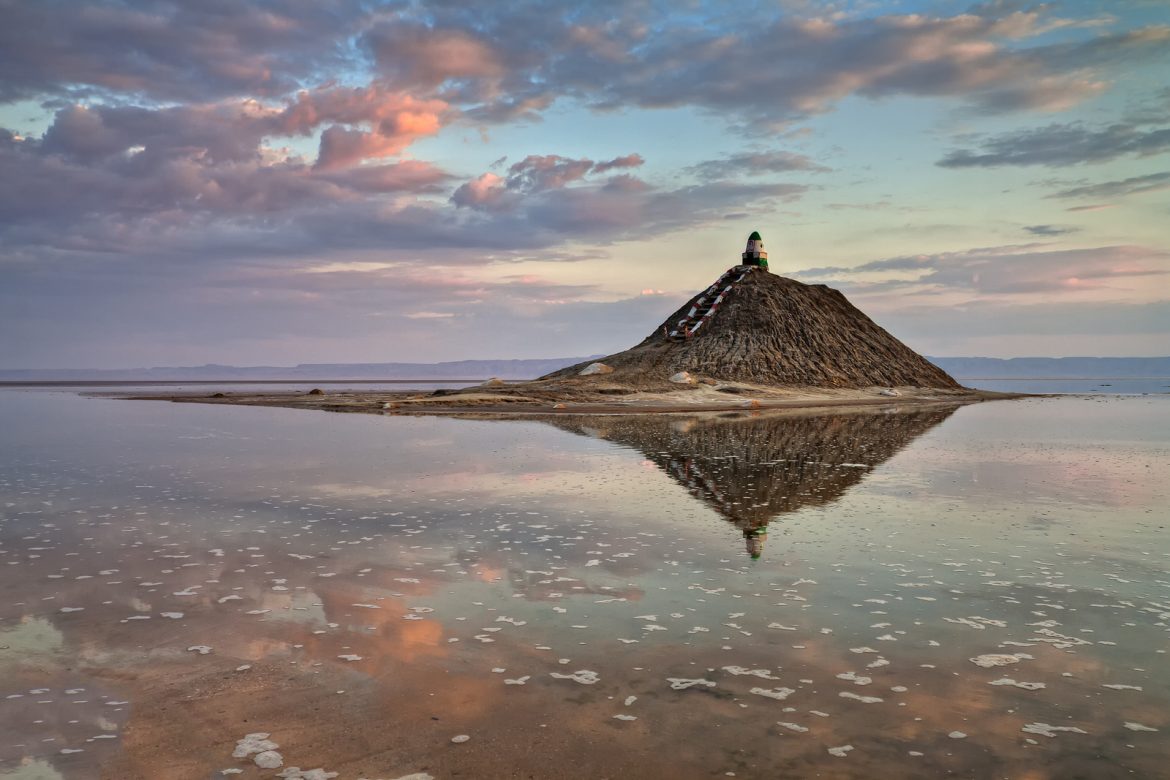 Chott El Jerid (Also referred to as Chott El Djerid, Shott El Jerid and by numerous other spelling variations) is a large salt lake located in the Tunisian part of the big Sahara desert. It is actually one of the most Mars-like places on Earth.

It is the biggest salt lake in the Sahara, and according to some estimates, the largest on the African continent. Chott el Djerid, with a surface area of more than 2,700 square miles, is more than 1.5 times the size of Utah’s Great Salt Lake.

The name of this lake is composed of two components: Chott refers to a lake in Northern Africa that dries up in the summer but generally retains some water during the winter seasons; El Jerid is an Arabic term that translates as “palm leaf” (the nearby El Jerid region in South Western Tunisia holds 15 times more date palm trees than its human population).

Chott El Jerid is a vast plain characterized by a severe desert environment and a near-complete absence of natural resources, especially fresh water.

It’s a challenging place to live, but traveling would be another matter. One might fairly describe the barrenness as mysteriously appealing, even magnificent.

While driving along the main road from the southern rim to the point north-west, it’s difficult not to stop and marvel the rainbow-colored salt deposits and tiny lakes that retain water even on the hottest summer days.

Interestingly, the salty water is a variety of colors, ranging from pale green to soft pink to vivid orange. At the lake’s end, you’ll come to an area with several date palm oasis.

Chott El Djerid is located near the city of Douz, which has been nicknamed the “portal to the Sahara.” With its naturally stunning backdrop, the salt lake has used as a filming set for a variety of films (together with the neighboring canyons and dunes). The Lars Family Homestead from the Star Wars film series is located on the lake’s northern point, adjacent to the settlement of Nafta, while Mos Espa from the same film saga is located less than ten miles north.

Chott El Jerid, which predates contemporary cinema culture, is often regarded as the most plausible candidate for the ancient lake Tritonis described in Greek mythology. Tritonis is the birthplace of the goddess Athena, and rather paradoxically, Tritonis was called after another Greek god, Triton, well known as the Greek god of the sea.

Ensure that you have a full tank of petrol and that you have more than enough drinking water. Off-roading in this area is perilous at any time of year, since even the most rugged four-wheel-drive car may become trapped.

It’s best to stay on the P16 route between Douz and Tozeur, or on the C103 if you’re traveling to or from Gafsa. Even better, consider hiring a local guide who is well familiar with the area.

Tunisian-Jewish Gastronomy Contributes to the Charm of Djerba