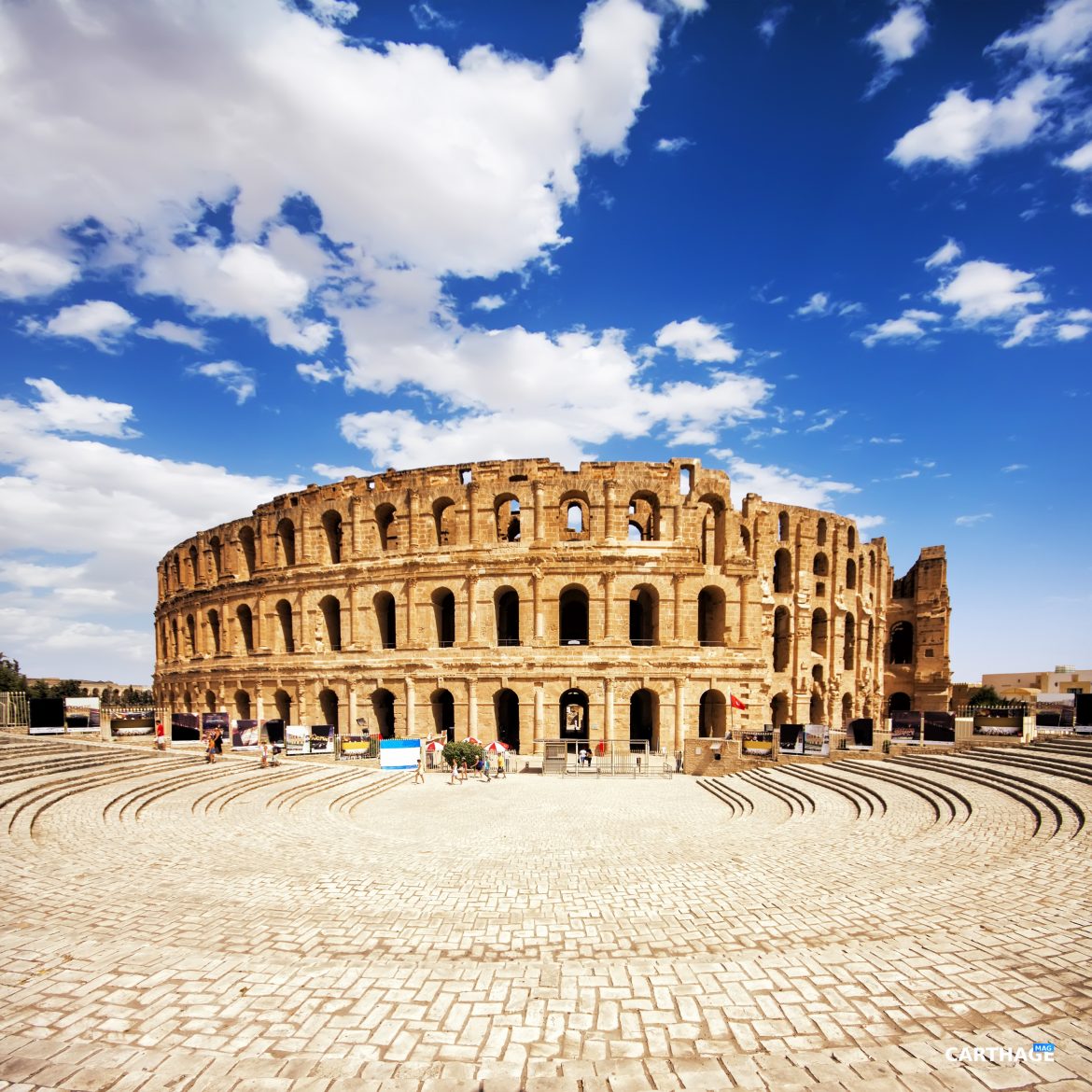 The Amphitheatre of El Jem is one of the largest and best-preserved Roman monuments ever built in the world, and is unique in Africa. It bears outstanding witness to Roman architecture, notably monuments built for spectator events. This majestic structure located in El Jem (or El Djem), a small village in the East of Tunisia, which was known back in Roman times as Thysdrus, continues to remain Roman’s greatest architectural legacy in North Africa and the Middle East.

El Jem Amphitheatre was built around 238 AD. This giant architectural and artistic creation is built entirely of massive stone blocks, with no foundations and free-standing. It is actually modelled on the Coliseum of Rome without being an exact copy of the Flavian construction.

This third-century monument illustrates the grandeur and extent of the Roman Empire. It was designed to seat a whopping crowd of nearly 40,000 people – considerably more than the population of the town itself. The sizes of the big and the small axes are respectively 148 meters (486 ft) and 122 meters (400 ft) — this makes it without a doubt among the largest Amphitheatres in the world.

Grounds for the bloody hand-to-hand combats between gladiators and wild beasts, the Amphitheatre of El Djem has fascinated and appalled visitors for over 1,700 years.

It definitely constitutes an important milestone in the understanding of the history of Roman Empire in the South of the Mediterranean and in Africa.

The El Djem Amphitheatre is one of the most accomplished examples of Roman architecture of an Amphitheatre, almost equal to that of the Coliseum of Rome.

Over the course of time, the monument of El Jem has conserved, without alteration, most of its architectural and architectonic components.

The Amphitheatre of El Jem is protected by the Law 35-1994 concerning the protection of archaeological and historic heritage and traditional arts (Heritage Code), for its special cultural significance, and is an impressive tourist attraction today.

Its colossal size and excellent preservation has given it the nickname the African Colosseum. Its remains were a symbol of Roman power in North Africa, and its beauty is enchanting.

Due to the very long history, its kind and unique architecture that can not be seen at any other place in Africa, its historical importance was recognized in 1979 when it was inscribed as a World Heritage Site. Hence, if you make it to Tunisia or anywhere near the vilalge of El Jem, you are probably not going to miss this dramatic attraction.

The Amphitheatre of El Djem was formerly in the Roman town of Thysdrus (modern-day El Jem), one of the most important towns in North Africa after Carthage due to trading and commerce. The Amphitheatre was built in the image of the Roman Coliseum by the African Consul Gordian. In AD 238, Gordian was declared Emperor of Rome during an ill-fated rebellion against the emperor Maximus.

After the fall of the Roman Empire, the Amphitheatre served in the Middle Ages as a fortress, and the population sought shelter during the attacks of Vandals in 430 and Arabs in 647, where each and every leader has left some kind of mark on it.

The monument of El Jem is the only one in the world, with the Colosseum of Rome, that still have an intact facade with three levels of galleries. Its location, looming over the flat, arid countryside, adds to its dramatic appeal. Inside, the monument has conserved most of the supporting infrastructure for the tiered seating.

The Amphitheatre has a basement area under the arena which was discovered in 1904 by archaeologists. The basement is intact and gives an indication of how the arena would have functioned. The main tunnel led 35 k to the sea where elephants dragged rock, Tunisian marble, and deliveries of marble from Italy during the 60 years of construction.

Later it served as a private entrance for the wealthy arriving by ship. Side rooms served to house slaves, caged lions, and gladiators. There were ramps for chariots and shafts to raise both caged slaves and animals into the arena.

This architectural and artistic well-preserved Amphitheatre constitutes an important milestone in the comprehension of the history and power of Roman Africa.

Being one of the most visited and most important monuments in Africa, it shall continue to be a beacon of Tunisia to explore the Roman architecture which was spread throughout three continents.

Who built the El Jem Amphitheatre and when?

The Amphitheatre was built by the African Consul Gordian. The precise construction date is debated, but most historians believe the building of El Jem Amphitheatre began in the year 238.

Why was the El Jem Monument built?

The year 238 was particularly tumultuous, as it included a revolt by the population of Thysdrus (El Jem), who opposed the enormous taxation amounts being levied by the Emperor Maximinius’s local procurator. The El Jem monument was built as part of an imperial effort to revitalize Thysdrus. The El Jem intended to be an entertainment venue, hosting gladiator fights and animal hunts.

For its special historical and cultural significance, El Jem monument is one of Tunisia’s greatest historical landmarks. Every year, over one million people visit it.

El Jem Amphitheatre vs. the Colosseum of Rome

El Jem is the second largest Roman Amphitheaters ever built after the Colosseum of Rome. It is regularly compared with the Colosseum in Rome, and it is no surprise why.

Was the movie gladiator filmed in the El Jem Colosseum?

The movie was filmed in Malta, Morocco and England with reconstructions of Ancient Roman cities made especially for the production.

Visiting the Amphitheatre of El Jem

This Roman Amphitheatre is one of the Tunisia’s most remarkable and greatest monuments. Every year, over one million people visit it.

The El Jem Amphitheatre is located in the middle of the village of El Jem, and is difficult to miss. However, a nice approach is from the southeast corner, via Street of Ali Belhareth. Feel free to stop for a tea or coffee across the street, and marvel at the exterior before venturing inside.

Massarra Mounira Dhahri is a professional Program Manager, freelance Translator and Interpreter (Arabic-English-French). Holder of a master’s degree in Professional Translation and Interpreting, and master’s degree in International Relations. Massarra has gained expertise in professional project management and interpreting as well as practices of the diplomatic corps, international organizations, and private sector policies since 2009. Massarra is passionate about diplomacy, cultural affairs, and communication. In her free time, Massarra plays violin. Contact info: Email.

5 Tips to Remember When Selling Your...