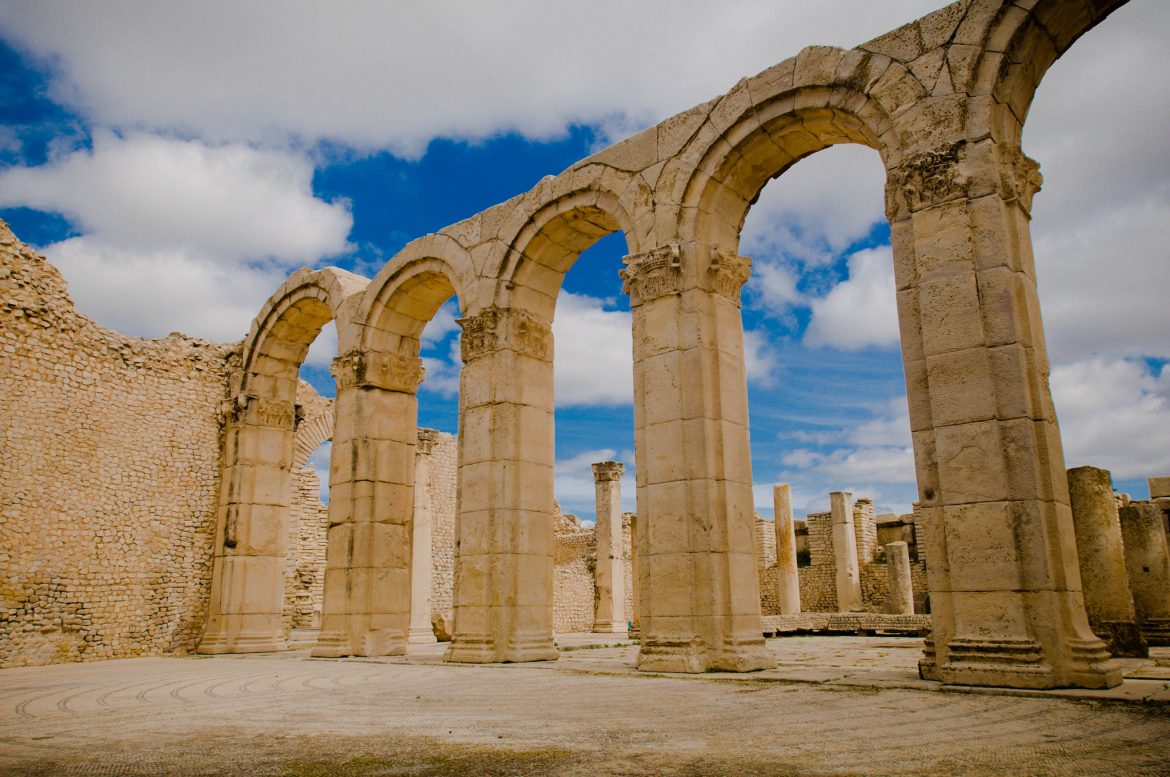 Ancient Mactaris, once the most important Roman city in this region, has been in ruins since it was destroyed in 1050 AD by invading Arab tribes. Prior to this, the town changed hands so frequently that its history reads like a who’s who of early Tunisian citizens, from Numidian to Byzantine, and its ruins reflect a synthesis of cultures as they merged.

Originally located beyond the borders of Roman Africa, the originally Numidian settlement served as a beacon for Punic refugees fleeing a sacked Carthage in 146 BC. It was later absorbed as part of the Roman Empire’s expansion into the area known as Africa Nova. Makthar became an important Byzantine fortification after surviving the Vandal invasion.

Near the entrance is a small museum with a collection of gravestones, statues, coins, and lamps illustrating the progressive transition from Numidian to Punic to Roman culture. A substantial floor mosaic depicts a wonderful zoo of peacocks, rabbits, and ducks.

Immediately south of the museum are the remains of the town’s second-century amphitheatre. The base and the gates used to keep competitors and animals out of the ring have been restored, but none of the seating has been preserved.

The main walkway leads south from the amphitheatre to Trajan’s Arch (AD 116), which features an elegant pediment that has been maintained exceptionally well due to its usage as the foundations for a 6th-century Byzantine tower. On the south side, a jubilant Latin inscription celebrating the conquering of the ‘Germans, Armenians, and Parthians’ is still partially visible.

Trajan’s Arch guards the southern entrance to the stone-paved forum, of which little remains except for its layout. The four columns at the forum’s northeastern corner mark the position of the town’s market, which also features a shrine to Mercury, the Roman god of traders and shops.

A route goes northeast from the forum to the ruins of the Temple of Hathor Miskar, devoted to the Carthaginian god and significant for demonstrating how long Punic beliefs persisted after the Romans arrived. Nearby are the ruins of a Roman villa called the House of Venus, so named after a mosaic discovered on the site and now housed in the site’s museum.

Returning to Trajan’s Arch, gaze to the south for two rows of columns belonging to the Basilica of Hildeguns, a modest 5th-century Vandal church. The baptismal font, which is concealed behind the rounded apse on the eastern end, retains remnants of the original mosaics.

The huge walls of the Grands Thermes Publics (Southeast Baths), one of the largest and best-preserved bathhouses in Roman Africa, dominate the southern section of the site. They were constructed in the third century AD and turned into a stronghold by the Byzantines. The middle hall’s labyrinthine-style mosaic floor, beneath its massive arches, is the standout attraction.

Proceed west on a stone-hewn trail. The jumble of full-length columns and massive blocks with Latin inscriptions at the site’s southwestern corner was the Schola Juvenum, a little-known juvenile club where young men congregated socially but may have also formed a sort of police force or tax collection office. It is a rare find in Roman ruins throughout the Empire and one of Makthar’s most intriguing locations. To further complicate matters, the edifice was turned into a church in the third century AD.

The area immediately south of the schola served as the town’s cemetery prior to the advent of the Romans; it is densely packed with Numidian burials.

Makthar is accessible via bus from Tunis to Kasserine, but is best viewed as a day excursion from Le Kef.