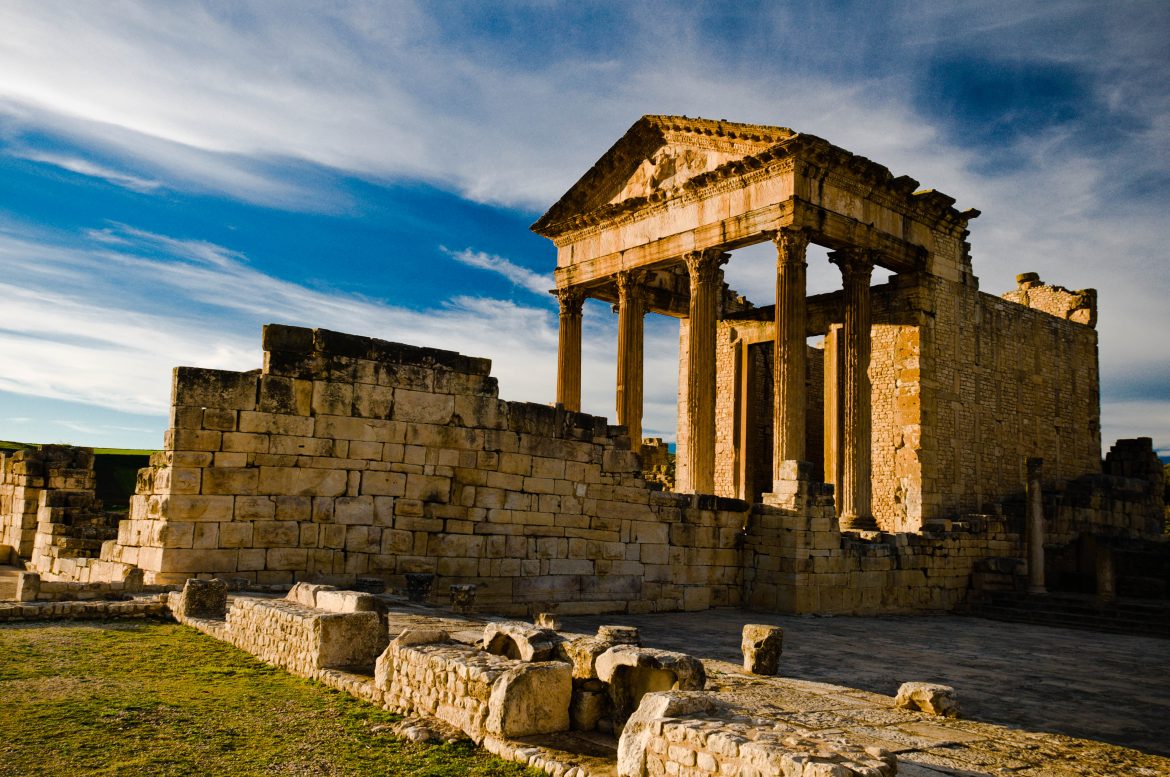 Once upon a time, two communities lived together or so to speak, the Numidians and the Romans, and built the city of modern-day Dougga.

Dougga, or Thugga, is undoubtedly one of the most impressive archaeological sites in Tunisia. It is one of Tunisia’s World Heritage sites. It has been added to the UNESCO World Heritage List since 1997.

Dougga’s current name comes from the Latin name Thugga, which is itself derived from the Numidian (Berber) name Tukka (or “steep rock”) found on Lybian inscriptions.

For the record, the town of Thugga was the capital of a Libyco-Punic state before the Roman invasion and it owes its origins to the fertile soils, the mountainous area and the cliff bordering the site. All those factors acted as a bulwark that protected the ancient Roman city which, at its heyday, was a thriving one!

With a history spanning 3000 years, Dougga is one of those fascinating archaeological sites that withstood the test of time, it is even considered as one of the oldest cities of North Africa.

This site which stretches over an area of 75 ha is easily accessible and well worth a visit!

From the theatre to the Temple of Juno Caelestis, some parts of this well preserved town need to be explored!

The Roman theatre of Dougga

Located just near the entrance to the site, the massive theater can accommodate up to 3500 people and offers a breathtaking view on the plain below.

The CAPITOL of Dougga

Dougga is home to one of the most beautiful monuments in the site. Dating back to the 2nd century CE, the temple was originally dedicated to the three Roman protective Gods Jupiter, Juno, and Minerva. It has three niches where the giant statutes of the three gods survive today basically intact .

The Forum of Dougga

The forum, which is located just next to the Capitol, seems not to have stood the test of time as few columns remain. However, this leaves for a place with an enchanting panoramic view surrounded by greenery.

The Temple of Juno Caelestis

Set amidst a scenic garden of olive trees, the Temple of Juno Caelestis is another well-preserved monument. It stands on a high podium which can be accessed through a stairway. The view is just picture-postcard.

The Punic-Libyan Mausoleum of Dougga

The Punic-Libyan mausoleum which was built in the mid-2nd century CE is one of the centerpieces of the archaeological site of Dougga. It is one of the rare models of well-preserved and surviving royal Numidian architecture.

The Arch of Alexander Severus is a Roman triumphal arch located in Dougga. The arch was built in 228 CE, in gratitude to the emperor for his beneficence towards the Roman city.

It functioned as one of the city gates, at the end of a road linking to the road between Carthage and Tébessa.

Djerbahood: 20 Incredible Works of Art on the Streets of Djerba

A Date with Tunisia

10 Cultural Aspects You Need to Know...