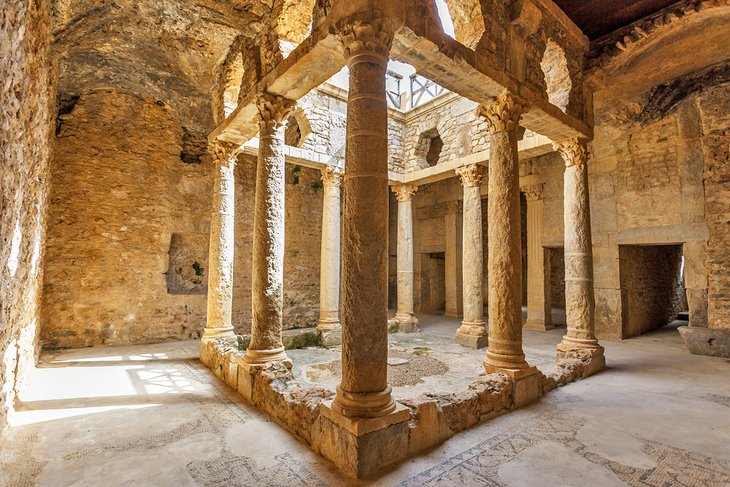 Located in the northwestern part of Tunisia in Jendouba governorate, Bulla Regia is one of the most fascinating and well preserved Roman Sites in the country most known for its unique architecture.

Bulla Regia was first a Berber settlement; traces of a very old civilisation were found notably in large cemeteries located to the south of the site. Ceramics imported from Greece dating back to the 4th century were also found on the site. During the 3rd century BC, the city fell under the control of Carthage and became a Punic town.

Inscriptions revealing the inhabitants of the town were venerating Baal Hammon, the chief god of Ancient Carthage, were discovered. It is believed that the people of Bulla Regia used to bury their dead in urns similarly to the Punic style. Ruins of a temple dedicated to Tanit, the goddess of fertility in Ancient Carthage, are preserved in the museum attached to the site.

Following the Second Punic War, the city became part of the Roman Empire in 203 BC.

In 156 BC, Bulla Regia was recovered by the Berbers as Masinissa, the 1st Numedian King, regained control over the land of his ancestors and made it his capital. The Roman Empire assumed control over the city once again in 46 BC and Julius Caesar rewarded it the title of free city after its neutral conduct during the Second Punic War. Under the rule of Hadrian, Bulla Regia was given the title of Roman Colony and its inhabitants were given full Roman citizenship.

The city slowly lost its place during the Byzantine rule and finally was destroyed due to an earthquake.

The architectural uniqueness of Bulla Regia is what made it such an important location in Tunisia. Many of the houses were composed of two floors, one of them being underground. This unique and peculiar architectural choice was used as a means of protection from the heat and the effects of the sun. The earthquake that led to the destruction of the city caused the collapse of the higher floors onto the underground ones.

The site also hosts an Amphitheatre, public baths, and various houses that are very well preserved as both of their two floors are still standing like the House of Treasure and The House of The Fisherman.

Many of the mosaic floors can still be visited at Bulla Regia but an important number of them are displayed in Bardo Museum.