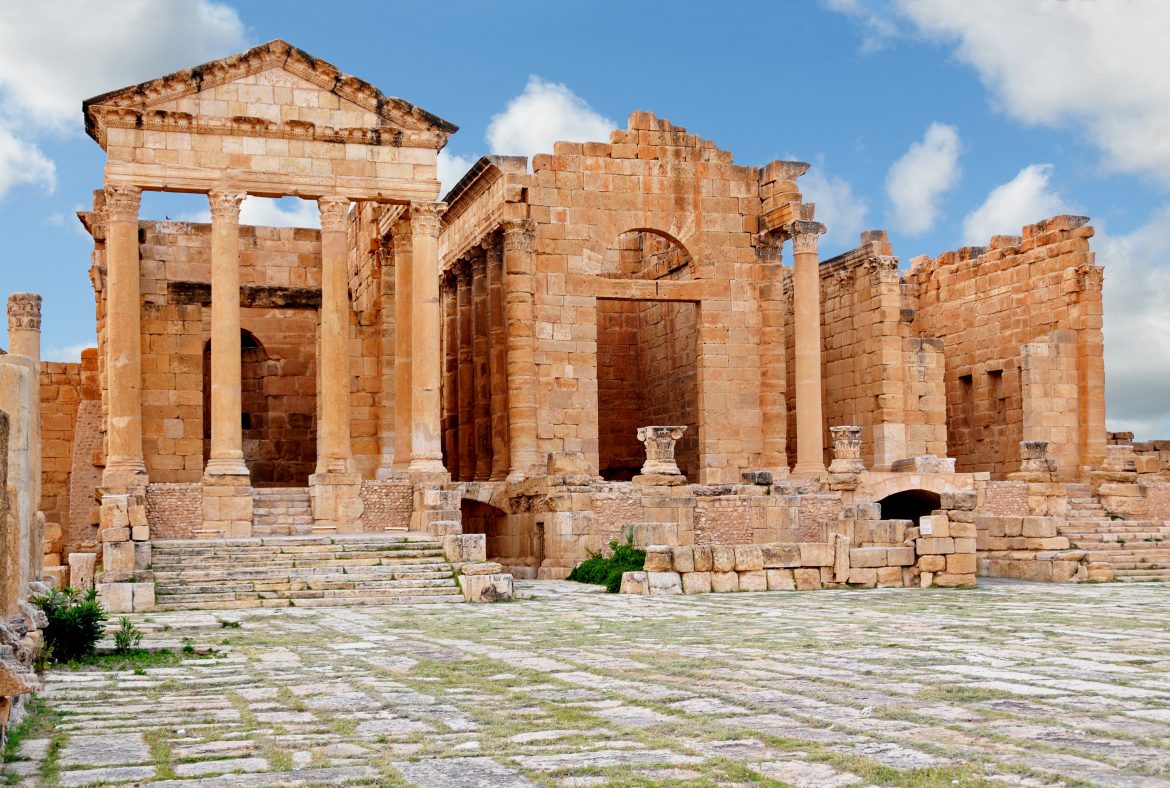 Sufetula, one of the best-preserved ancient Roman cities in North Africa, is swamped with temples, monumental arches, and bath complexes that testify of a once-thriving civilization. Much about this fascinating place remains unclear. Several of its Byzantine-era basilicas retain their magnificent mosaic-covered baptistries.

Sufetula, founded in the first century AD on the site of a Numidian settlement, appears to have evolved in a similar way to other Roman cities in the province, such as Dougga and Mactaris (Makthar).

Sufetula rapidly became prosperous, establishing its greatest temples in the second century, when the town – like the rest of Roman Tunisia – was at its height of prosperity. Fortunately, Sufetula’s olive orchards ensured its prosperity long after other Roman towns declined, enabling it to develop into an important Christian center in the fourth century.

Sufetula became the Byzantines’ regional capital, transforming it into a military foothold from which they could confront the region’s rebellious indigenous tribes. Prefect Gregory established his independence from Constantinople here in AD 647. His moment of fame, however, lasted just a few months before he was assassinated by the Arabs, who also demolished a large portion of Sufetula.

The renowned temples — Sufetula’s crowning glory – soar above the surrounding ruins. The Byzantines built the wall around them in the sixth century AD. The forum is entered via the beautiful triple-arched Antonine Gate, which was erected to Emperor Antoninus Pius and his adopted sons Marcus Aurelius and Lucius Verus in AD 139. It leads to a wide paved forum encircled by two rows of chopped-off columns that lead up to three second-century temples dedicated to one of the Roman pantheon’s major gods.

The Temple of Jupiter, in the center, is flanked on either side by slightly smaller temples dedicated to Minerva, Jupiter’s daughter and goddess of wisdom, and Juno, Jupiter’s wife. Jupiter’s temple was only accessible via bridges connecting the other two temples, not via a flight of stairs in the front. The ensemble conveys a tangible impression of what a Roman city’s center looked and felt like.

Sufetula was a center of Christianity in North Africa until it was ravaged by the Arabs. The Basilica of Bellator is the first of a sequence of destroyed chapels located around 100 meters north of the forum along the main northwest road. It was constructed in the early fourth century AD on the ruins of an unidentified pre-Roman temple.

Bellator was replaced by the nearby 6th-century Basilica of St Vitalis, which was larger and finer. It features two magnificent baptismal fonts: one with a wonderful fish-themed mosaic at the bottom and another with an exquisite flower mosaic in vibrant reds and greens, complete with stairs and chairs. The basilica has the name of the donor commemorated in the mosaic inscription.

The journey northwest from the churches winds through a neat grid of unexcavated streets until it reaches the meagre remnants of the Arch of Septimius Severus. To the west, just before the arch, are the remnants of the House of the Seasons, so named after a mosaic currently housed at Tunis’s Bardo Museum. Its colonnade is intricately carved with vines, and it features a few spacious rooms encircled by columns.

A rocky walk leads north from the arch, via the remnants of a tiny basilica, to the site of the town’s amphitheatre, which has not been excavated and is so overgrown that the form is difficult to see. Another road descends from the arch eastward to a rebuilt Roman bridge spanning the Oued (River) Sbeitla.

The ruins of the major baths, east of the forum, are notable for their intricate under-floor heating system in the hot chambers, which is plainly visible now that the floors have collapsed partially. Geometric mosaic floors remain in existence here, as well as in the adjacent palaestra (gymnasium) – some are recent replacements, but they are plainly discernible.

Northwest of the Great Baths are four precarious-looking stone pillars — the last remnants of the Church of St Servus, which was built in the fourth century AD on the foundations of an undetermined pre-Roman temple.

The impressively restored 3rd-century theatre, located just east of the Great Baths, commands a commanding view of Oued Sbeitla and is especially lovely in the spring when wildflowers blossom.

At the excavations’ furthest southernmost point, the excellently preserved Arch of Diocletian with its 712 columns stands. Between the bridge and the tree-lined pathway right inside the site gate, the charming grassy gardens are ideal for a picnic.

The park has minimal signage (a few signs identify the landmarks but provide no explanations), and there are no guides at the entry, as the majority of visitors arrive on pre-arranged trips.

The archaeological site is located right across the road from the Musée de Sbetla. Get your entry ticket at the modern-looking Complexe Touristique, one building further along the main road from the museum.

Why I Moved Back to Tunisia – For Good

Tunisia’s Flag — One of World’s Oldest...

Tunisia Made it to Lonely Planet’s Top...