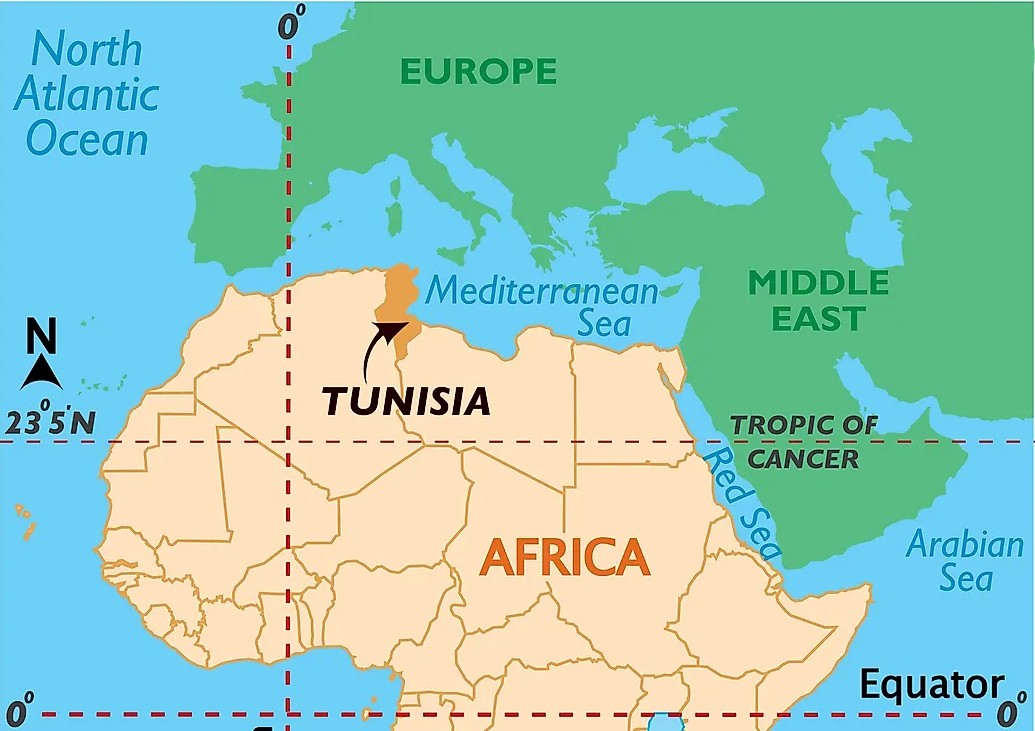 Tunisia is a North African country with a total size of 163,610 square kilometers and a Mediterranean Sea coastline of 1,148 kilometers. Tunisia’s north-south extent gives the country with a wide variety of landscapes. The nation enjoys a moderate relief.

As shown on the above map, the Tunisian Dorsal is a mountain range that extends in a southwest-northeast direction from Tunisia’s western border with Algeria to the eastern Cape Bon peninsula. This mountain is an extension of the Atlas Mountains in the Sahara. The mountains of the Northern Tell, which include the Kroumirie Mountains in the northwest and the Mogods along the northern shore, are located to the north of the Tunisian Dorsal.

Between the Tunisian Dorsal and Northern Tell Mountains is the basin of the Medjerda River (shown on the map above). This valley contains a set of historic lake basins and is the nation’s most productive grain-growing area. The Medjerda River is the only perennial river in Tunisia and its drains into the Gulf of Tunis.

As we go further south, we find a series of depressions known as chott. These chotts are the final destination of many intermittent rivers that flow throughout the country. Large grasslands called Al-Sil and Al-Jifra extend inland from the eastern coastline.

The majority of the country’s southern region consists of a sandy desert, much of it is part of the Sahara Desert’s Sand Sea, also known as the Grand Erg Oriental. Since the majority of wadis here are dry year-round, water accessibility is a big challenge.

Tunisia has several islands as well. The island marked on the map as Djerba is the largest in North Africa. It is located in the Gabès Gulf.

Mount Chambi (1,544 m) is the country’s highest point. At 17 meters below sea level, Chott El Jerid is the lowest point in Tunisia.

The governorates are further subdivided into 264 districts called Moutamdyet which are further divided into smaller administrative divisions called Municipalities. Tataouine is Tunisia’s largest governorate by area and Tunis is the largest one by population but the smallest by area. The capital of this governorate, Tunis, is also the national capital.

Ever wondered where is Tunisia in map? Well, it is located in the Grand Maghreb area of North Africa, and is home to Cape Angela, the northernmost point on the African continent. Tunisia lies in the Northern and Eastern Hemispheres. It only shares borders with two countries. Libya bounds Tunisia to the southeast and Algeria to the west and southwest. The country’s northern and eastern coastlines border the Mediterranean Sea.

The Great Mosque of Sousse — A Must-See...