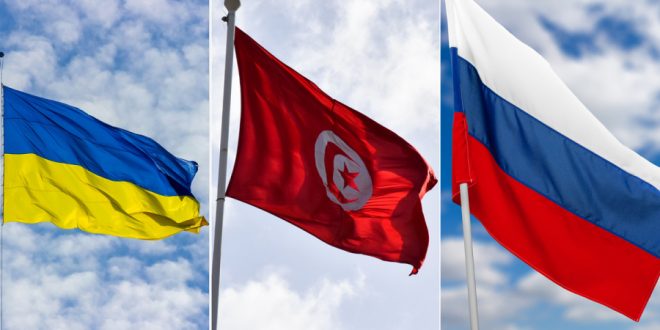 Households across Tunisia are rushing to stock up on flour, semolina and other staples as food prices rise following Russian-Ukrainian war, both key wheat exporters to the country.

According to industry leaders and senior European officials, consumers worldwide will feel the “enormous impact” of Russia’s attack on Ukraine through drastically increased food costs and substantial disruptions to agricultural supply networks.

John Rich, executive chairman of Ukraine’s largest food supplier MHP, expressed concern about the key spring planting season, which is critical not only for local supplies but also for the massive amounts of grains and vegetable oil exported by the country.

“This crisis has had a profound effect on Ukraine and Russia’s ability to supply the rest of the globe,” Rich said.

The planting season’s success would be determined by “military action in the coming week or two,” he added. This would be jeopardized if Russia’s army advanced into the country’s western region.

Ukraine, along with Russia, is the world’s largest supplier of grain and sunflower oil, accounting for little under a tenth of worldwide wheat exports, approximately 13% of maize exports, and more than half of the sunflower oil market, according to UN Comtrade. Commodity prices skyrocketed during Russia’s invasion, with wheat reaching an all-time high at one point.

Rich warned of “spiraling inflation” in the price of wheat, corn, and other commodities, which were already increasing in price before to the wars due to drought and increased demand as economies recovered from the pandemic. “It’s a fairly poisonous combination,” he explained.

Some fear that the Russian invasion could result in hunger and unrest, recalling how rising food prices contributed to various Arab uprisings over the last decade.

In one supermarket in Tunis, the shelves were devoid of flour or semolina, and only three containers of sugar were on a shelf next to a sign reading, “One kilo per person, please.”

The issue, store managers asserted, was “panic shopping,” not shortages.

Houda Hjeij, a shopper who claimed she couldn’t get rice or flour for two weeks, blamed the authorities.

“With the Ukraine war, they did not plan ahead,” the 52-year-old Tunisian woman explained.

Bulk buying is usual in Muslim countries prior to Ramadan, which is slated to begin in early April this year.

However, some claim that the conflict in Ukraine has spurred a buying frenzy.

Sugar sales have tripled as Tunisians store staple items, according to Baccour, who emphasized that there are no food shortages.

Each day, Hedi Bouallegue, 66, makes his way through the grocery stores in his Tunis neighborhood, stocking up on staples such as cooking oil and semolina.

“I am even willing to pay double,” he told AFP.

Slim Talbi, a baker, said he was paying three times as much for wheat as in the past, “despite the fact that the full impact of the (Russia-Ukraine) war has not yet hit us.”

Talbi added, “I am concerned” about the future, citing Tunisia’s reliance on Ukrainian wheat.

Tunisia’s Economy and the Russian-Ukrainian War

Since the outbreak of the Russian-Ukrainian war on February 24, the political and economic aftermath has impacted all nations, especially Tunisia, which imports a large amount of wheat from these two countries.

The war will also have an effect on tourism and investment in the bond market, on which the government relies heavily in the process of attracting foreign investment through simple and quick loans, both of which are typically impacted during times of war and big international crises.

The Price of Wheat

Wheat was the first important impact on Tunisia because Tunisia imports 80 per cent of its needs from Ukraine and Russia. The country imports almost half of the soft wheat used to make bread from Ukraine. Authorities say the North African country has enough supplies to last three months.

On the impact of the ongoing war, wheat prices rose globally to levels that have not occurred in 14 years, by nearly 40 per cent, to reach $11.44 per bushel. This rise in wheat prices has not happened since the global economic crisis of 2008, with expectations of further increases with the continuation of the Russian-Ukrainian war, especially that the two countries together account for about 30 per cent of global wheat exports.

Effects on the Price of Rice

In parallel with the increase in wheat prices, the prices of other grains also increased, including rice. The price increase reached TND 5 bringing the price of local rice (with wide grain) to TND 2,500 per tonne instead of TND 2,000, and fine grain rice to TND 3,300 instead of 2,300, in the Tunisian markets.

The war will also affect the tourism sector. The tourism sector is one of the main sources of foreign exchange in Tunisia as it now represents 6.5% of Tunisia’s GDP and provides 340,000 jobs of which 90,000 are direct jobs or 11.5% of the working population with a high share of seasonal employment. The number of Russian tourists coming to Tunisia in normal times amounted to about 1 million. Thousands of Ukrainians as well visit the country every year.