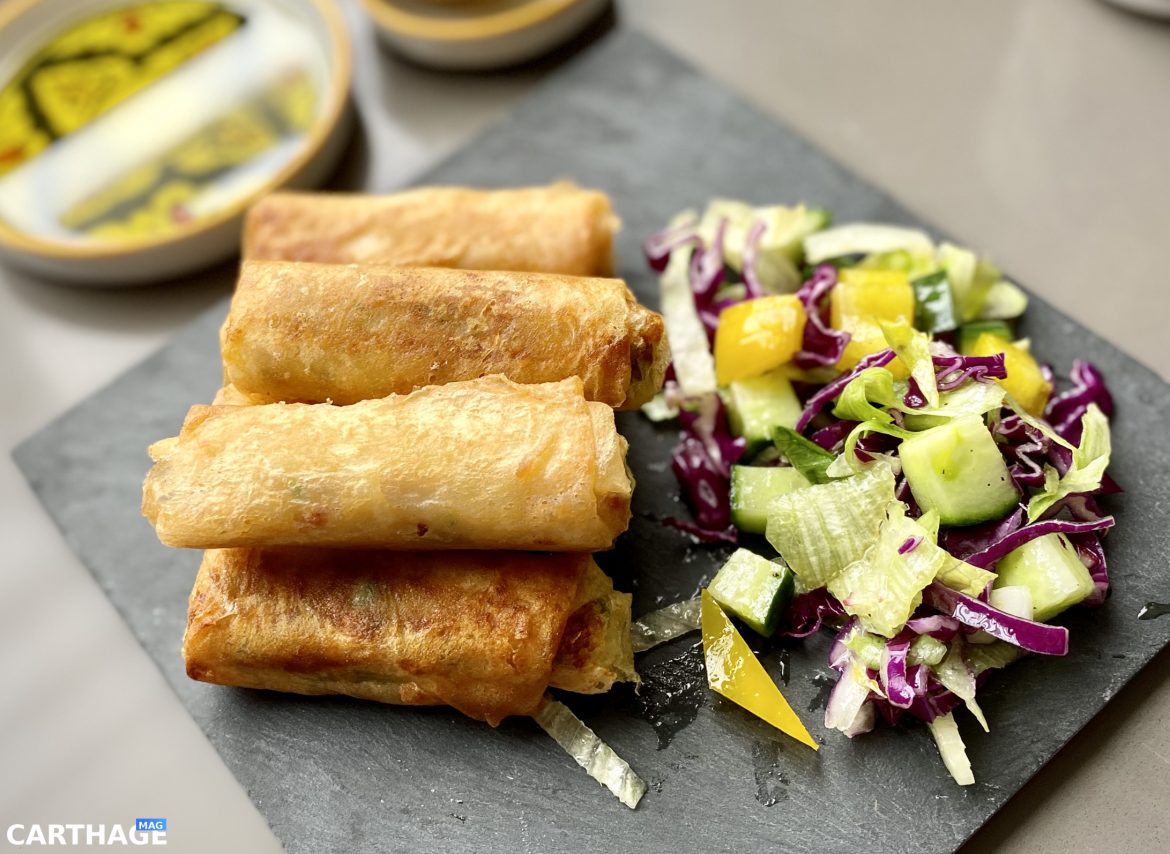 In honor of Ramadan, I bring to you this yummy recipe which is a Tunisian favorite in all households, especially during this blessed month. The appetizer’s name is translated to “Fatma’s fingers” which does not sound appetizing at all, BUT, trust me, it is absolutely delicious! Doights de Fatma is basically a fried, crunchy finger made with thin pastry dough and stuffed with different ingredients.

The most important ingredient for this recipe is the “Malsouka” which is the thin paper that is used for wrapping the filling. The “Malsouka” resembles filo dough but is a little thicker. It is an unleavened dough made with semolina or flour.

You can find “Malsouka” at any large supermarket in Tunisia. You can also find homemade Malsouka – which in my opinion tastes better – in the smaller stores in your neighborhood.

For the filling, you can use whatever your heart desires. Some options include shrimp, ground beef, ground turkey, and tuna. Whisked egg is what holds the mixture together but is optional.

For this recipe, I used tuna as the protein and added mashed potato and ricotta. These ingredients act as the holding agent instead of the egg. I don’t like using eggs because then you won’t be able to freeze the extra.

Hope you enjoy, and Ramadan Kareem to all those celebrating!

This Fatima’s Fingers / Swabaa Fatma recipe is part of the #TasteTunisia initiative. In search of Tunisian cuisine, through a series of articles/videos, Carthage Magazine offers a window to the Tunisian food and recipes.

Rahma is an international registered dietitian/nutritionist and a certified yoga instructor. She graduated from Cornell University in New York and finished her dietetic internship at the University of Virginia Medical Center. She is a food lover and has a deep passion for healthy living while being authentic to your heritage. She worked in many countries and loves to recreate traditional food with a healthy twist. She aims to inspire people to live balanced and healthy lives, both physically and mentally - basically the best version of yourself. She loves cooking (obviously), reading, yoga, chocolate, and watching movies.

The Acropolium of Carthage: An Architectural Marvel from the French Colonial Era

9 Things to Know about Ramadan in...