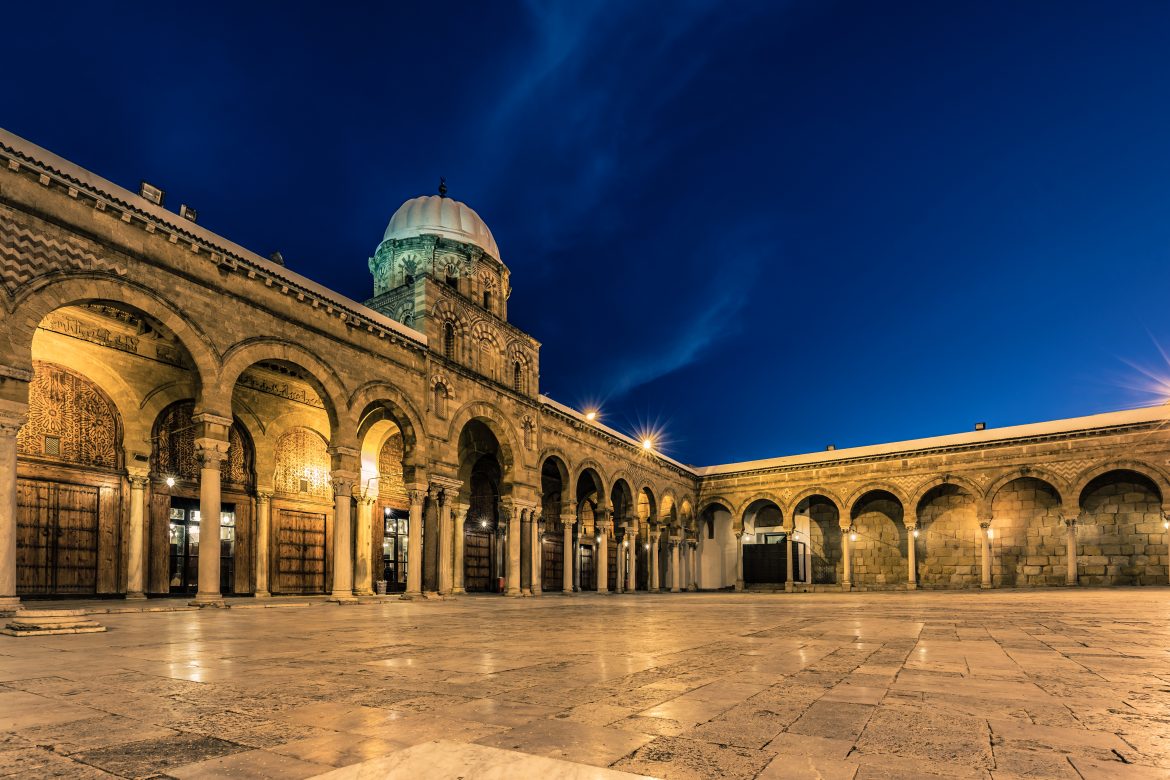 Al-Zaytuna Mosque, or Ez-Zitouna or Ezzitouna Mosque was the second mosque to be built in Africa and the North Africa region after the Great Mosque of Kairouan. The exact date of building varies according to source but foundation dates back to 732 A.D.

The Great Mosque of Ez-Zitouna is the oldest mosque in Tunis. It covers an area of about 5,000 square meters with 9 entrances.

It has 160 authentic columns brought originally from the ruins of the old city of Carthage. Ez-Zitouna mosque is known to host one of the first and greatest Universities in the world.

Ez-Zitouna University attracted students from all parts of the known world at the time. Many scholars graduated from the Ez-Zitouna for over a thousand years. From Ibn ‘Arafa, one of the greatest scholars of Islam, Imam Maziri, the great traditionalist and jurist, the famous Tunisian poet Aboul-Qacem Echebbi to the greatest historian and social scientist, Ibn Khaldoun, and countless others all taught there.

The Ez-Zitouna mosque takes up the typology of the mosques of Cordoba and Kairouan with its trapezoidal courtyard framed by a 10th century gallery.

The gallery serving as a narthex rests on ancient columns and capitals, the other three galleries resting on columns with white marble capitals imported from Italy in the mid-19th century. In the middle of the courtyard is a sundial which helped to fix the times of the prayers.

The cupola of the narthex located at the entrance of the prayer hall, known as the bahu, has an ocher stone and red brick decor. The many niches covering the square base and the octagonal drum relate it to Fatimid art.

The rectangular hypostyle prayer room (56 meters by 24) covers 1,344 m² while nearly 160 ancient columns and capitals delimit 15 naves and 6 bays. The median nave and the transverse nave of the transept, wider than the others (4.80 meters instead of 3 meters), cross in front of the mihrab which is itself preceded by a dome bearing an inscription attributing it to the caliph Abbasid Al-Musta`in.

The square minaret, at the northwest corner of the courtyard, 43 meters high, takes up the decoration of the Almohad minaret of the Kasbah mosque made of limestone interlacing on an ocher sandstone background.

The eastern façade was completed by a courtyard adorned with a Hafsid style colonnade.

Visiting the Great Mosque of of Ez-Zitouna

The oldest mosque in Tunis is well-worth a visit. Whether you are Muslim or not, it is highly recommended to stop by this place if you are in Tunis or around.

The building is beautiful. The courtyard is impressive and the tower looks imposing. When not being used for prayer the door to the mosque is open but with an attendant in charge so that tourists cannot just wander in.

The Great Mosque of Ez-Zitouna is located in the heart of the Medina of Tunis. Please dress appropriately when visiting as it is still an active place of worship. Non-Muslims are not allowed in the prayer room, but the door is left open if you’d like to look inside.

Feel free to stop for a tea or coffee across the street, and marvel at the exterior before venturing inside.

The Complete Guide of The Imperial Cities of Tunisia

This Tunisian Uni. Is Among the Top...