The Acropolium of Carthage: An Architectural Marvel from the French Colonial Era6 min read 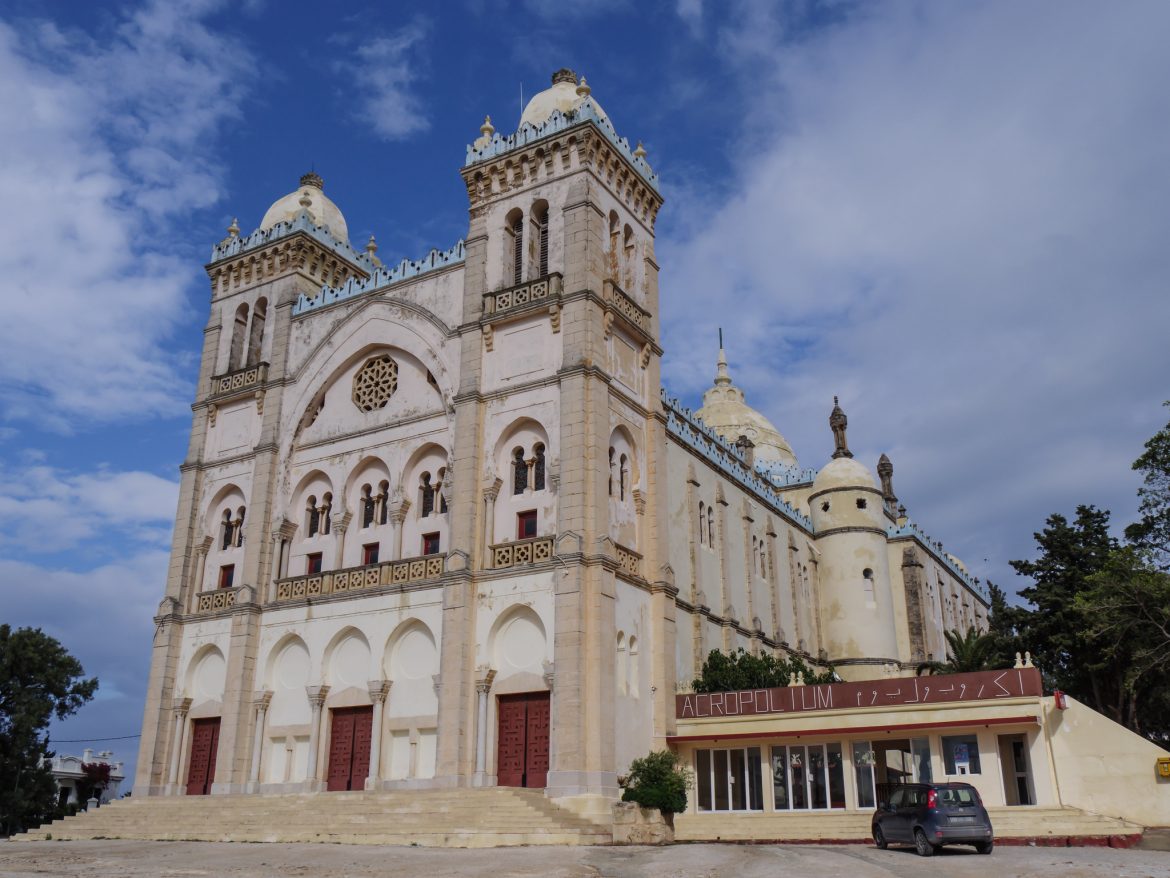 Ascending the hill at Carthage, the road branches off into the woods, eventually reaching the dome of the Acropolium of Carthage, commonly known as the Saint Louis Cathedral. From afar, the cathedral’s domes entice passersby to study the cathedral’s beautiful architecture, rich history, and cultural events.

The Acropolium of Carthage, located on Byrsa Hill in Carthage, is not only an architectural marvel from the colonial era, but also a significant addition to Tunisia’s contemporary cultural scene.

Saint Louis Cathedral, erected during the reign of the Beys, is significant both historically and religiously. Hussein Bey II authorized the general council of France to construct a church on the site of old Carthage in 1830.

“We perpetually provide to His Majesty the King of France a location in the Malka adequate to erect a religious monument in honour of King Louis IX at the site of this prince’s death,” he stated. We promise to respecting and promoting the respect for this monument dedicated by the King of France to one of his most distinguished ancestors.”

The cathedral is dedicated to King Louis IX, who died in Carthage in 1270 while his route to Jerusalem on the eighth crusade. Built between 1884 and 1890 under French colonialism, the cathedral became the home church of Cardinal Lavigerie, leader of the Algiers and Carthage archdioceses, granting the cathedral primacy in Africa.

“During the 1980s and 1990s, the government concentrated on promoting the culture and history of Carthage’s Roman and Punic epochs, but paid scant attention to the colonial period,” Okbi explained. “This landmark, which comes from the late nineteenth century, is a piece of a rapidly vanishing legacy.”

“The place has its own personality,” he continued, “which has been etched by history and events that characterize the colonial era that is a part of Tunisia’s history.” It bears a portion of the Christian heritage that Tunisia has cultivated throughout its history.

“Unfortunately, many Catholic landmarks from that era were abandoned, damaged, and eventually vanished, which is why it was critical to convert the cathedral into a cultural center in order to preserve its wonderful architecture and history.”

Constructed by French architect Abbot Pougnet, the structure exhibits Byzantine and Gothic characteristics, which were prevalent in the era’s architectural style. Two square towers flank the building, which is 65 metres long and 30 metres broad and shaped like a Latin cross.

Once inside, one can only be in awe of the beautiful, elaborate ornamentation that covers the walls and ceilings. The 174 marble columns with golden caps give attention to the sculpted wood ceiling, which is covered with engravings. Cardinal Lavigerie commissioned artists from Venice and Aleppo to embellish the wood beams sourced from Hungarian and Dutch forests.

The light that enters the cathedral through its 284 windows bathes the interior walls in blues, greens, and yellows. While the windows’ glass contains embellishments of plants and animals, the two central windows portray Saint Louis and Saint Augustine guarding the cathedral.

“It also features stunning Gothic and Byzantine architecture, making it a one-of-a-kind piece of colonial architecture,” he added.

The church is brimming with hidden treasures. In the center, an onyx monument holds Saint Louis’ reliquary. Among the cathedral’s other wonders are the mosaics of Saint Cyprien on the left side of the transept.

Along with its architectural marvels and historical artifacts, the cathedral regularly holds classical music concerts. Since 1992, it has served as a cultural center.

“It was critical to maintain the monument’s viability by conducting cultural activities that drew attention and recognition to the location,” Okbi explained. “We want to emphasize the architecture of the space, which is why we created Musical October.” The idea was ambitious in that it sought not only to highlight the beauty of this monument but also to establish a cultural pole adjacent to Carthage’s tourism zone.”

“The place’s purity and holiness led us to dedicate the festival to classical music, and we began hosting international ensembles with our European partners in October, the best month for its pleasant climate and brisk breeze,” he continued. “Since its inception in 1992, the number of concerts has climbed from three to twenty.” It evolved into a musical rendezvous, where guests are treated to intriguing architecture and history in addition to enchanting music.”

With its historical and cultural significance and beautiful perspective from the summit of the hill, the Acropolis is an exciting site to visit for culture and heritage enthusiasts.

Why I Moved Back to Tunisia – For Good