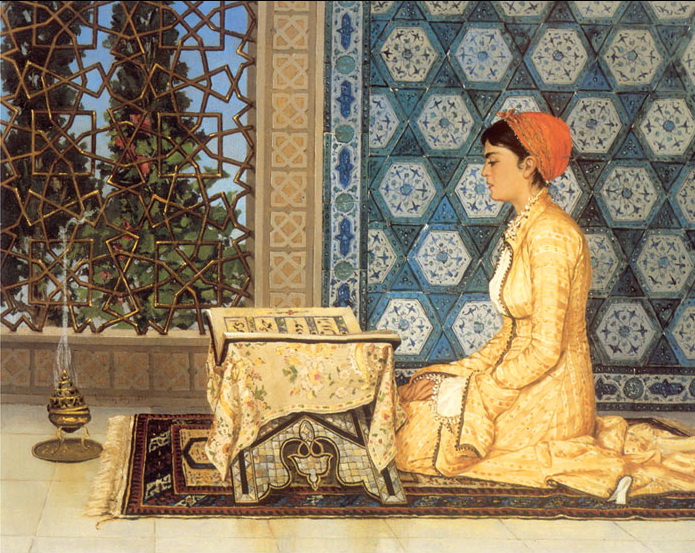 By calling for women’s education and freedom, Saida Manoubia was truly a feminist ahead of her time.

Her shrine, located in the governorate of Manouba, west of Tunis, is a historical and cultural landmark of the city. It’s a gathering spot for locals and a venue for musical events. Visitors partake in the eating, conversing, and singing of folk songs praising and singing the saint’s virtues.

When I got inside, I was advised to talk to Aunt Zaziya, an elderly woman who resides in one of the building’s rooms. A long line of people had formed outside her door. I stepped in and sat down while she was having lunch in a small room surrounded by a few bags of gifts from the visitors a short time later.

People bring Aunt Zaziya treats to give away to visitors, as well as meat to cook and eat there, and she sends them away with Lella Saida’s blessings. She told me stories about couples who were able to conceive after years of unsuccessful attempts and women who married at a very advanced age thanks to the saint’s blessings. Aunt Zaziya, on the other hand, refused to continue the conversation when I told her I wanted to learn more about this renowned and revered woman.

I had the opportunity to speak with some of the women present and hear their stories. Amira, 25, described her visits to the shrine as providing her with “interior comfort.” But she didn’t know anything about Lella Saida’s background, her life story, or Sufism in general. Saida Manoubiya was described as a “smart and nice woman who assisted the underprivileged” by other regular visitors. However, the specifics of what made her such a wonderful woman were not widely known.

This lack of understanding runs against to Saida Manoubiya’s own beliefs, as well as how she lived her life and why she is regarded as one of Tunisia’s greatest women.

Education in a Patriarchal Society

Aicha, who grew up in Tunis during the Hafsid reign in the 13th century, possessed outstanding intelligence and intuition. Her father was a religious figure, an Imam or a Quran instructor. In his relationship with Aicha, it’s worth noting that he encouraged her education by teaching her Arabic (her native tongue is Amazigh) and the Quran.

It was evident that Aicha was different; she was a free spirit who refused to conform to the limits put on women at the period, something the villagers did not appreciate. Her behavior was viewed as unconventional or liberal, to the extent where her father was frequently chastised for her conduct.

According to historian Abdel Jalil Bouguerra, education was only available to specific women during that time: foreigners from the Mashreq, Al-Andalus, or the ruling family’s elite women. Aicha, on the other hand, was neither of these things.

She began knitting and spinning wool to support herself after settling in Montfleury, and she quickly became a disciple of Abu al-Hasan al-Shadhili, one of the most renowned religious personalities of his time, who was immersed in the Sufi school of Ibn Arabi al-Andalusi. Women and men are equal, according to Ibn Arabi, a controversial yet prominent person in Islamic history. It’s no wonder that Aicha picked this Sufi order as her educational path because he wrote extensively about the different female teachers who molded his spiritual knowledge.

Aicha continued to break social conventions at the time. She studied the Quran and attempted to analyze it attentively in order to comprehend its contents, opting for inquiry as a way to religion. She would leave her house without a male companion and go out to preach and debate with men. Some Sheikhs are said to have called for her stoning as a result of this.

She, on the other hand, worked hard in class, passed multiple exams, and swiftly advanced from student to teacher. Sufi intellectuals and kings were drawn to her arguments with her mentor, al-Shadhili. Continuing her schooling at that time is a remarkable achievement in and of itself. But pursuing and teaching Islamic studies and religion, a field dominated largely by men, is even more impressive.

Aicha rose to prominence as a significant religious person in Tunisia, with connections to the most powerful religious groups. In Sufi societies, accompanying her master to various prayer spots on top of mountains and hills is considered a luxury. She then got close to prince Abou Mouhamad Abdel Wahed and Sultan Abou Zakariyah, and she received access to prayer sites formerly only open to men, such as Mousalla Al-Idayn, erected by Abi Zakariya in 1229.

Aicha’s fluent style and advanced language skills, which were once exclusively expected of prominent male intellectuals, as she preached at the Mosque of Safsafa (the area is now the shrine of Abdallah Chrif), astounded and amazed people.

Aicha was a philanthropist who lived off her earnings and gave the remainder to the underprivileged, especially women, in addition to her scholastic and religious qualities. There is also evidence that she purchased some Tunisian slaves who were being shipped to Italy only to free them six centuries before slavery was abolished in Tunisia in 1846.

In an official ceremony, Al-Shadhili gave Aicha his cloak, ring, and the title of Qutb, and referred to her as a “Imam of men” as he was leaving Tunisia. In Sufism, the highest spiritual position is Qutb (literally “pole”), and Aicha was a pole of knowledge and religion during her lifetime and beyond.

Her spirituality and deeds influenced people’s lives in such a way that she was elevated to the status of a Saint, and her life was surrounded by supernatural and divine legends known in Sunni Islam as “Karamat.” Her father once gave her a bull for agricultural purposes, but she instead gave it all to the impoverished, requesting them to return the bones. The bull came back to life once the bones were retrieved.

What is certain about her life is that she was a strong, independent woman who was able to break free from social constraints and establish herself as an equal and intellectual superior to males of her time. Saida Manoubiya was a feminist ahead of her time, advocating for women’s education and freedom.

The Women Who Built Tunisia with Hands and Hearts