Medina of Tunis: Exploring the Old Walled City in the Heart of Tunis11 min read 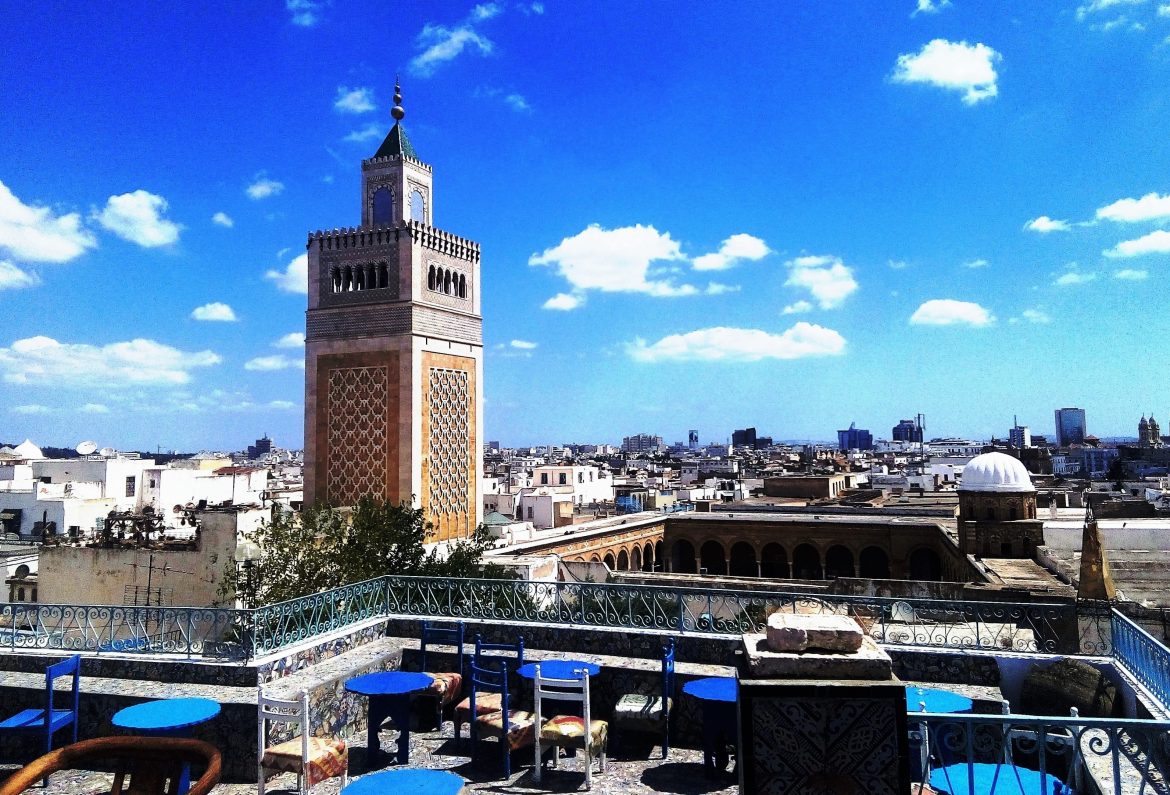 From the 12th until the 16th century, under the Almohads and Hafsids, Tunis was one of the largest and wealthiest cities in the Islamic world. Some 700 monuments, including palaces, mosques, mausoleums, madrasas and fountains, testify to this remarkable past.

Over the years, the medinas of the Maghreb have spread their enchantment much beyond the massive walls that enclose them. Weary merchants have sought refuge in Fanadiq (ancient inns used by caravans) after haggling for commodities created in the medina to be sent to every part of the globe.

Artists, especially 19th-century Orientalist painters, established lucrative careers by depicting medina landscapes on canvas, and Hollywood directors have long exploited medinas for exotic location shots and as the inspiration for extravagant set designs back in the studio.

These fortified mini-cities, where people have lived, worked, and traded since the Middle Ages, mark the coastline and interior of North Africa, reminding us of the central role that trade and craftsmanship have always played in this region.

Medina of Tunis: The Old Walled City in the Heart of Tunis

The Medina of Tunis is one of the first Arabo-Muslim towns in the Maghreb (698 A.D.). It is situated in a lovely plain region of north-eastern Tunisia, a few kilometers from the Mediterranean.

It is a human settlement that bears witness to the interaction of architecture, architecture, and the socio-cultural and economic consequences of changes in prior cultures.

From the 12th until the 16th century, under the Almohads and Hafsids, Tunis was one of the largest and wealthiest towns in the Arab world. Exist today are numerous testimonials from this period and preceding ones. Between the 16th and 19th centuries, new powers adorned the city with numerous palaces and villas, as well as large mosques, zaouias, and madrassas.

The Medina of Tunis was declared a Unesco World Heritage Site in 1979, and is currently undergoing a careful restoration by local conservation organizations and heritage entrepreneurs.

A pleasure of any trip to the capital of Tunisia is strolling through its small alleyways, sipping mint tea in its Shisha-scented cafes, and shopping for gifts in its bustling Souks.

The Medina of Tunis has Over 700 Historic Monuments

The Medina of Tunis is famous for its unique interaction between socio-cultural activities, architecture, economics, and urban life of the ancient human settlements within the Maghreb in 698 AD. It is for this reason that the Medina of Tunis was inscribed as one of Tunisia’s UNESCO World Heritage sites in 1979.

This historic Medina contains 700 monuments including mosques, madrasas, palaces, mausoleums, and fountains. Examples of these monuments are the noble houses of Dar Lasram and Dar Hussein, the El Attarine military barracks, and the mosques of Zitouna and Kasbah.

The medina of Tunis covers around 300 hectares and is divided into a number of neighborhoods. The highlights of the medina are located on or near the streets radiating from the iconic Zitouna Mosque with its characteristic Almohades-style square minaret. The mosque is accessible from every Bab (gateway) leading into the medina, although most visitors begin at Bab El Bahr on the western border of Centre Ville, then travel west on Rue de la Kasbah or Rue Jamaa Ezzitouna.

Explore the heart of the medina with its Souks, madrasas (schools for study of the Quran), mosques, and zaouias (mausoleums), and then exit through the residential Torbet El Bey neighborhood, which is home to Ottoman-era mosques and mausoleums as well as local hammams and some of the most magnificent dars in the medina.

This intriguing boulevard, named after a 13th-century mystic and scholar, extends north from the Zitouna Mosque and joins with Rue du Pacha at Place de La Hafssa. Be sure to have a camera on hand while you explore its length, as photos of the intricately carved and colorfully painted doors facing the street are Instagram-worthy.

The Association for Safeguarding the Tunis Medina has restored a number of dars and zaouias in the El Hafsia neighborhood; be sure to visit Dar Lasram, a 19th-century mansion that serves as the association’s headquarters, and Dar El Monastiri, which is now home to the Centre National des Arts Calligraphiques, which trains experts in traditional Arabic calligraphy.

Ask any visitor or native to name their favorite souq in the medina, and the Souk des Chechias will likely be mentioned. It is located at the intersection of Rue Sidi Ben Arous and Rue de la Kasbah and consists of two covered passages lined with jewelry box-like chambers painted mint green and embellished with mirrors, stained glass, and decorative wall panels. These magnificent stores sell solely chechias, the traditional blood-red felt headgear of Tunisia.

When the souq was constructed in the 17th century, one million chechias were produced here annually. Today, the roughly ten chaouachis still working in the souq manufacture both the classic Tunisian version and customized felt hats in a range of colors and styles that are distributed worldwide.

You may watch the chaouachis at work, buy a hat to take home, and enjoy a cup of tea or cool drink at Café Chaouachine, a popular spot with local merchants and shoppers. Le Berbere, which sells a good selection of babouches (traditional leather slippers); Kandinsky Art Gallery, which sells old books, prints, paintings, and objets d’art; and the eccentric but charming Ed Dar, a traditional house filled with rugs, textiles, jewelry, and knickknacks that will appeal to collectors.

Follow your nose from Rue Sidi Ben Arous to the Perfume Makers’ Souq in the shade of the Zitouna Mosque. It dates back to the 13th century and continues to house stores offering scented oils and waters. Fondouk El Attarine is a perfectly renovated Fondouk that houses a courtyard restaurant providing high-quality traditional cuisine.

The trendy La Maison de L’Artisan boutique on the second floor sells exquisite Tunisian handicrafts, such as babouches, scarves, ceramics, clothes, fragrances, copperware, rugs, and jewelry. Crafts stores in the vicinity are also worth a look.

This street, accessible from the square in front of the Zitouna Mosque, contains one of the last remaining traditional bathhouses in the medina, the male-only Hammam El Kachachine. Its facade is distinguished by red-and-green painted columns and black-and-white ornamentation atop a horseshoe-shaped archway — a centuries-old design element indicating the presence of a hammam.

This street is also home to the 18th-century Madrasa El Bachia, which currently houses ateliers for artisans, and Doken, one of the medina’s greatest budget restaurants, which serves wonderful cuisine with French accents.

The areas immediately north and south of the Zitouna Mosque are home to a maze of vaulted Souqs named after the products they have traditionally sold – the Souq des Étoffes (Fabric Market), Souq El Berka (Jewellers’ Market), and Souq de la Laine (Wool Souq) are three of the most atmospheric, lit by hazy shafts of sunlight and lined with traditional workshops. Popular M’Rabet, a cafe with an Orientalist fantasy décor where customers lounge on carpeted platforms while enjoying drinks and food, is located nearby.

Consider taking a tea break here en route to the Tourbet El Bey neighborhood, named for the mausoleum built by the Ottomans at its center. Two dars of architectural and historical significance are also located here: Dar Othman, which was constructed in the 16th century for a prominent pirate and politician, and Dar Hussein, a mansion from the 18th century that today houses the National Heritage Institute.

To Bargain or Not to Bargain?

A non-negotiable price tag is now the standard at the majority of stores in Tunis, including the medina. Exceptions include rugs (never pay the initial price quoted by a rug dealer) and certain handicrafts.

If you’re interested in engaging in haggling while in the medina, you should peruse the wares in a few stores to judge the quality and average asking price. Once you’ve determined what you’re looking for and how much you believe it’s worth, ask the store for their price.

If you believe the price is too expensive, say so and ask if the person would accept less. If the price appears to be negotiable, attempt to negotiate a discount of 20 to 30 percent; nevertheless, always be pleasant rather than aggressive, and keep in mind that the merchants are likely to be less wealthy than you and in need of a substantial profit margin.

Staying in the Tunis medina

Approximately 20,000 permanent people reside in the medina, primarily in the El Hafsia and Tourbet El Bey districts, and a growing number of boutique hotels in traditional dars welcome visitors.

READ: Hotels in Tunisia — Where to Stay in Tunisian Cities & Islands

It’s crucial to remember that relatively few of the medina’s cafes and restaurants remain open at night, and that the streets here can become deserted after dark. L’Hôtel Dar El Jeld near the Kasbah, Dar 24, Dar Ben Gacem, and La Chambre Bleue in El Hafsa, and El Patio Courtyard House in Tourret El Bey are all alluring options.

Here’s What Makes Kerkennah a True Heaven on Earth