The Jews of Tunisia: History of the Jews in Tunisia8 min read 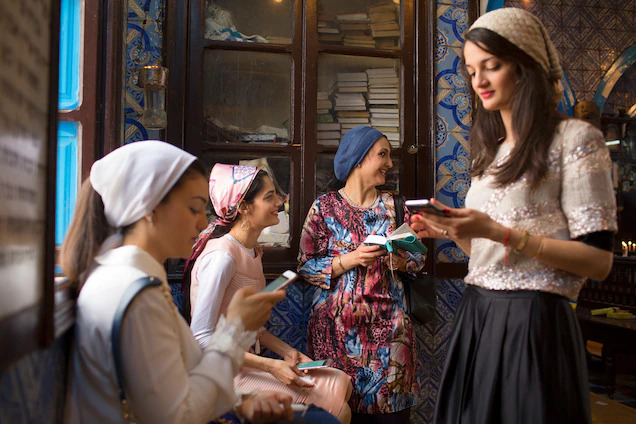 Similar to Jewish communities in Tripolitania and Spain, the Jews of Tunisia claim a historical presence on their land. There is no evidence of their existence before the second century. Among the hypotheses:

Nonetheless, if these possibilities were confirmed, it is likely that these Israelites integrated with the Punic populace and sacrificed to their gods, such as Baal and Tanit. Following the Hellenization of the eastern portion of the Mediterranean Basin, Jews from Alexandria or Cyrene could have subsequently moved at Carthage.

The cultural environment enabled them to practice Judaism in a manner more consistent with ancestral customs. Small Jewish settlements occurred during the last years of Punic dominance over North Africa, although it is unknown whether they grew or vanished over time. In any event, Jews have established in the new Roman province of Africa, enjoying Julius Caesar’s favor. In return of King Antipater’s assistance in his war against Pompey, the latter recognized Judaism and the position of Religio licita and, according to Josephus, granted the Jews a special status within the Roman Empire, as reaffirmed by the Magna Charta pro Judaeis.

Suggested Read: Tunisian-Jewish Gastronomy Contributes to the Charm of Djerba

These Jews were joined by Jewish pilgrims expelled from Rome for proselytizing, 20 by a number of defeated in the First Jewish–Roman War, deported and resold as slaves in North Africa, and by Jews fleeing the suppression of revolts in Cyrenaica and Judea during the reigns of Domitian, Trajan, and Hadrian. After the First Jewish-Roman War, the Romans exiled 30,000 Jews from Judea to Carthage, according to Josephus. [13] It is highly probable that these Jews established settlements on the land of modern-day Tunisia.

The descendants of the early Jewish settlers have a story that their ancestors settled in that region of North Africa long before the destruction of the First Temple in the sixth century BCE. In 1883, the French captain Ernest De Prudhomme discovered the sancta synagoga naronitana, the ruins of an ancient synagogue dating back to the third to fifth centuries BCE, in his Hammam-Lif house (“holy synagogue of Naro”).

After the destruction of the Second Temple, a large number of exiled Jews settled in Tunis and participated in agriculture, livestock breeding, and commerce. They were separated into clans led by their respective leaders (Mokdem) and were required to pay the Romans a 2 Shekel per capita tax. Under the rule of the Romans and, after 429, the accommodating Vandals, the Jewish population of Tunis grew and prospered to such an extent that early African church councils found it necessary to adopt restrictive rules against them. After the defeat of the Vandals by Belisarius in 534, Justinian I issued his persecution edict in which Jews were categorized alongside Arian Christians and Pagans. As elsewhere in the Roman Empire, the Jews of Roman Africa would have adopted Latinized names, worn the toga, and spoken Latin after centuries of subjugation. (Reference needed)

In the seventh century, Spanish refugees from the persecutions of the Visigothic king Sisebut and his successors fled to Mauritania and lived in Byzantine settlements, thereby increasing the Jewish population. Al-Qayrawani says that during the time of Hasan ibn al-conquest Nu’man’s of Hippo Zaritus (Arabic: Bizerta) in 698, the district’s governor was a Jew. When Tunis fell under the control of the Arabs or the Baghdad caliphate, a second migration of Arabic-speaking Jews from the Levant arrived in Tunis.

In 1948, the Jewish population of Tunisia was projected to number approximately 105000 inhabitants. As of 2022, there were approximately 1500 Jews in the country. The majority of these Jews resided in Tunis, with communities being present in Djerba.

Tunisia was the only Arab nation directly occupied by the Germans during World War II. Robert Satloff states, “From November 1942 to May 1943, the Germans and their local collaborators imposed a forced-labor regime, property expropriation, hostage-taking, mass extortion, deportations, and killings. They compelled tens of thousands of Jews in the countryside to wear the Star of David and established Judenrat-like committees of Jewish leaders to enforce Nazi objectives under the fear of incarceration and death.”

In 1956, following Tunisia’s independence, a number of anti-Jewish government directives were issued. In 1958, the government of Tunisia disbanded the Jewish Community Council and destroyed ancient synagogues, cemeteries, and Jewish neighborhoods in the name of “urban renewal.”

More than 41,000 Tunisian Jews immigrated abroad as a result of the situation’s deterioration. The country’s Jewish population had decreased to 20,000 by 1967.

During the Six-Day War, Arab rioting mobs attacked Jews and burnt synagogues and shops. President Habib Bourguiba sent an apology to the Chief Rabbi after the administration condemned the assault. The government urged the Jewish people to remain, but did not prohibit their departure. Following this, 7,000 Jews migrated to France.

In 1982, Jews in the towns of Zarzis and Ben Guardane were attacked. The State Department reports that the Tunisian government “moved firmly to defend the Jewish community.”

In 1985, a Tunisian guard opened fire on worshippers in a Djerba synagogue, killing five individuals, four of whom were Jewish. Since then, the government has endeavored to avert further catastrophe by providing substantial protection to Jewish Tunisians when necessary. After Israel bombed the PLO headquarters near Tunis on October 1, 1985, “the authorities made unprecedented precautions to protect the Jewish community.”  After the Temple Mount disaster in October 1990, “the authorities encircled the biggest synagogue in Tunis with heavy security.”

Djerba has one Jewish kindergarten. In addition, there are six Jewish elementary schools (three in Tunis, two in Djerba, and one in the seaside city of Zarzis) and four Jewish high schools (two in Tunis and two in Djerba). Only at the government-run Essouani School and the Houmt Souk Secondary School in Djerba do Jewish and Muslim pupils study together. The Jewish pupils in Djerba might choose to attend religion studies at a Jewish school. Additionally, there are Yeshivot in Tunis and Djerba.

The community contains two senior living facilities. The country has a number of kosher eateries and five rabbis: the chief rabbi of Tunis, a rabbi from Djerba, and four others from Tunis. The majority of Jewish community members observe Kashrut.

“Many tourists visit the El Ghirba Synagogue in the village of Hara Sghira on the island of Djerba. Although the current structure was constructed in 1929, it is thought that a synagogue has been on the location for the past 1,900 years. The yearly trek to Djerba at Lag BaOmer is one of the Tunisian Jewish community’s many distinctive and colorful rituals and festivals. The Bardo Museum in Tunisia features an exclusive display of Jewish ceremonial artifacts.

“The government promoted anti-discrimination and tolerance education through a series of religious tolerance lectures. “According to Jewish community leaders, the government aggressively protected synagogues, notably on Jewish holidays, funded the salary of the grand rabbi, and partially supported restoration and maintenance expenditures for some synagogues.”

On April 11, 2002, a vehicle carrying natural gas exploded into the exterior wall of the Ghriba synagogue on the island resort of Djerba. Tunisian officials first stated that the truck collided inadvertently with the synagogue’s wall, but a group affiliated with Osama bin Laden’s Al-Qaeda network claimed responsibility for the attack, which was actually a terrorist attack on the oldest synagogue in Africa. The explosion killed seventeen persons, eleven of them were German visitors.

Today, the nation’s greatest indigenous religious minority consists of 1500 Jews. The remaining two-thirds of the Jewish community resides on the island of Djerba and in the nearby city of Zarzis.

As of 2019, the State Department said, “Jewish groups indicated that they continued to worship freely, and the government continued to provide protection for synagogues and partially finance restoration and maintenance expenses. The government preserved the Jewish cemetery in Tunis, but not those in other places, notably Sousse and El Kef.”

A delegation from the U.S. Embassy, including the Ambassador, participated in the Lag B’Omer pilgrimage to the El-Ghriba Synagogue and met with Jewish leaders from May 21-24, 2019. The Ambassador and embassy personnel then attended a multifaith Iftar near the Synagogue organized by the minister of tourism, during which the prime minister and ministries of religious affairs and culture also participated. Simultaneously, a new school for 120 Jewish-community girls was opened in Djerba.