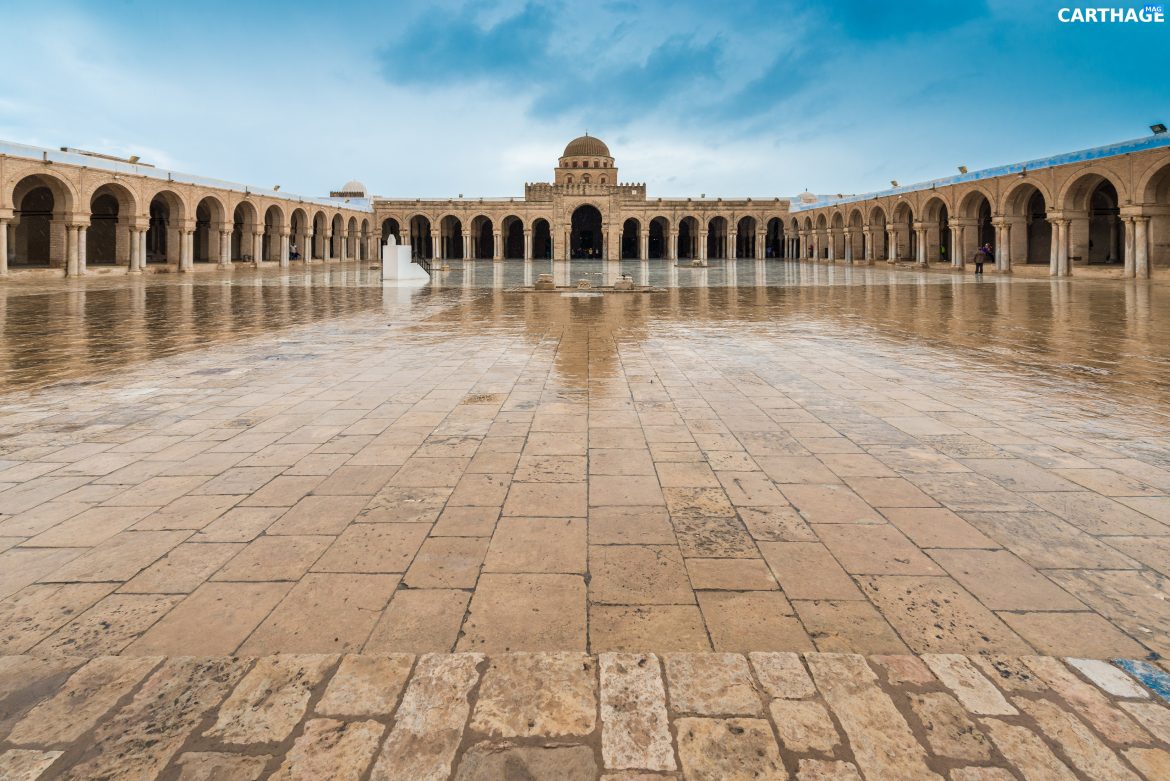 The Great Mosque of Kairouan is the oldest Muslim place of worship in Africa and is commonly regarded as the fourth holiest site in Islam. Founded in 670, this ancient Mosque is an architectural time portal that illustrates the mixed influences of pre-Islamic, Roman, and Byzantine architecture.

One of the most important mosques in North Africa is the Great Mosque of Sidi-Uqba ibn Nafaa in Kairouan. The city of Kairouan, located in the center of Tunisia, has long been the North Africa’s most ancient and holy city.

The Great Mosque of Kairouan is Islam’s fourth most holiest site. It has been said that seven pilgrimages to this mosque are considered the equivalent of one pilgrimage to Mecca.

The Great Mosque, rebuilt in the 9th century, is not only one of the major monuments of Islam but also a universal architectural masterpiece.

The structure of the Kairouan Mosque is part of an expansive complex, the monument itself covering 10,800 square meters (about 115,660 square feet). Within, there is a prayer room with 17 naves supported by carved columns, as well as the finely decorated mihrab, a special niche indicating the direction of mecca, outfitted in marble panels and luster tiles covered in floral patterns.

There is also a pool, known as the Old Cistern (Al-Majal al-Qadim), and what is said to be the oldest surviving minibar—a finely carved wooden pulpit of Asian teak.

Outside, there is a decorated flagstone courtyard and towering, three-story minaret, reminiscent of Roman lighthouses. At 32 meters (104 feet), it remains one of the city’s highest structures.

After its establishment, Kairouan became an Islamic and Qur’anic learning centre in North Africa.

The first Mosque was built in Kairouan in 670, shortly after the arrival of Muslims to North Africa. It was built by the founder of Kairouan, Sidi Oqba, a companion of Prophet Mohammed and an Arab general who led the Muslim conquest of the Maghreb.

Oqba was born in Mecca, grew up in Egypt and travelled from there to the west serving the Rashidun Caliphate since the Reign of Umar and later on the Umayyad Caliphate during the reigns of Muawiyah I and Yazid I. This is why the mosque is also known as the Mosque of Sidi Oqba Ibn Nafaa).

The current Great Mosque was built by Emir Abou Ibrahim Ahmed in 863.

For centuries, the Great Mosque of Kairouan has served as a pilgrimage destination for North Africans not able to make the long trip to Mecca. According to popular belief, seven trips to Kairouan was worth one Hajj to Mecca.

The whole historic city of Kairouan, including the Great Mosque of Kairouan, is protected by the Law 35-1994 regarding the protection of archaeological and historic heritage and traditional arts (Heritage Code), for its special religious and cultural significance, and is an impressive tourist attraction today.

The Great Mosque served as a model for several North African mosques, particularly for its decorative motifs, which are unique

Who built the Great Mosque of Kairouan and when?

It was built in 670 by Sidi Oqba Ibn Nafaa, an Arab general who led the Muslim conquest of the Maghreb.

Why is the Mosque of Kairouan important today?

It is situated in the UNESCO World Heritage town of Kairouan, the Great Mosque of Kairouan is the oldest, and is one of the most impressive and largest Islamic monuments in North Africa. It is as well Islam’s fourth most holiest site.

Visiting the Great Mosque of Kairouan

This Mosque is one of the Tunisia’s most remarkable and greatest monuments. A fantastic place to visit and so much history surrounding this Mosque.

The Great Mosque of Kairouan is located in the middle of the city of El Kairouan, and is difficult to miss. However, a nice approach is from the southeast corner, via Street of Sidi Abdelkader. Please dress appropriately when visiting as it is still an active place of worship. Non-Muslims are not allowed in the prayer room, but the door is left open if you’d like to look inside.

Feel free to stop for a tea or coffee across the street, and marvel at the exterior before venturing inside. If you’re hungry, you’ll taste the most delicious Kafteji over there. Kairouan is known for its tasty and spicy Kafteji. If you’re fan of Sweet pastry, you should taste what it is called Makroudh, a sweet pastry made with semolina and filled with dates, a specialty from the city of Kairouan.

Cost of Living in Tunisia — Traveling...