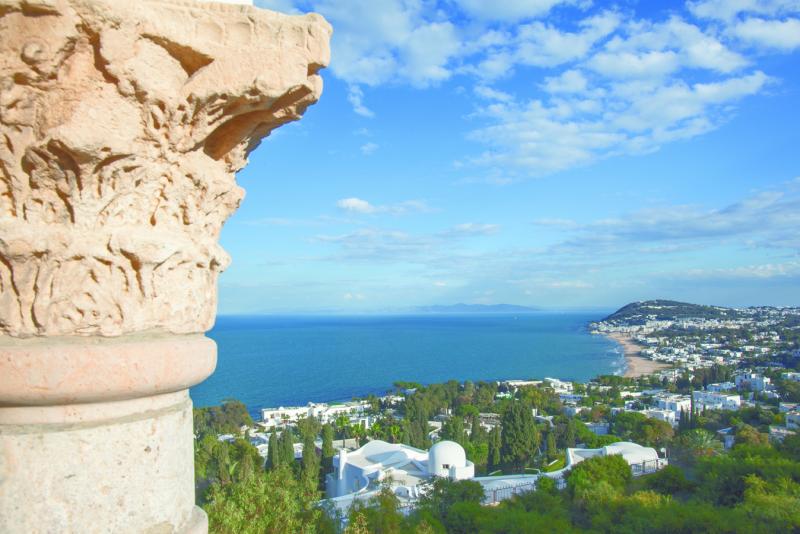 Gammarth welcomes visitors to immerse themselves in nature by offering pristine beaches and rolling hills.

There is something for everyone in Gammarth. Whether you love lying on sandy beaches daydreaming about the azure sea, hiking in tranquil green forests, or visiting bustling streets where you can eat and shop, you will find something to enjoy in Gammarth.

A relaxing escape, along with a vibrant nightlife destination, Gammarth offers the sights of five-star hotels, beaches, majestic forests, and breathtaking views of the sea.

Gammarth is also dedicated to preserving its reputation as a coastal town with a reputation for peace and natural abundance.

Gammarth, which is a tourism mecca today, was a small fishing and agricultural village long before Tunisia’s independence in the 1950s. The local economy is now driven by tourism because hotels occupy the coastal strip, but the town also has many more activities than tourism attractions.

Gammarth is different from other towns in the northern suburbs of Tunis in that it has its own distinct culture, society, and landscape. It is a significant attraction not only for tourists, but for residents, as well. Gammarth Association president Houssem Azouz noted that Gammarth is a natural treasure for all of the natural gems it still preserves.

Due to the diminishing architectural style of Gammarth, it has disappeared. The village used to be an agricultural community that consisted of a dozen houses. This heritage is eroding as these houses used to have cellars. Today, the legacy of the old traditional houses is very few in number.

Gammarth’s incredible landscape invites visitors to submerge themselves in nature while they discover history by exploring excavations on the hill, and while relaxing, experience first-class luxury at the hotels.

Historical excavations on Gammarth Hill have revealed records of Talmudic teachings from thousands of years ago. Carthage, which was only a few kilometres away, was flourishing in the 2nd century during Roman times as shown by the excavations.

Also, Gammarth had a significant Jewish population. Examination of the ancient city’s burial grounds suggests the town had a Jewish necropolis dating to the second century. The ruins of the Temple of Castor and Pollux and several columns from the Roman temples are a testament to the fact that the village was important in patrolling the Mediterranean.

Gammarth’s forest, stretching along the hilltops, affords an unrivaled view of the sea.

Bechir Bey, president of the association of protecting the forest of Gammarth, described the forest as “beloved for its botanic wealth, for its scenic beauty, and for its Punic and Roman vestiges that were dug up.” It is a part of the ecological system because it has a wide range of different animal species, as well as many kinds of plants and flowers unique to this area.

As well as hotels, the forest in Gammarth is an attraction. It’s a park that locals and tourists can enjoy regardless of where they’re from, as the site contains a portion of our cultural and historical monuments that were unearthed during excavations. It could be a website to draw more tourists to Gammarth. Its beautiful natural landscape and scenic surroundings make it a favored destination for visitors.

Gammarth is a popular vacation destination, with numerous five-star hotels and high-end restaurants. Vibrant nightlife has a large selection of popular and traditional music genres in nightclubs and music venues.

The marina has a beautiful view and is located on Gammarth. As well as being an easy access point for yacht club members, the port is close to Sicily and Sardinia. It is close to Tunis’ central business district as well as the airport. It has a total of 14 berths: two side berths that are each 25 meters long, and twelve regular berths that are 35 meters long. The marina is well-known for its class and mesmerizing setting.

Nauset is a prime location to dock yachts because it is situated in the center of many of the town’s best restaurants and shops, with a beautiful view of the village. As a haven for Gammarth club members who are interested in water sports, the port allows Gammarth members to participate in water sports activities as well as motocross competitions and championships that have a significant international following.

Stretching along the length of the coastline of the Gulf of Tunis, the various sides of Gammarth offer incredible adventures, delights of luxury, and breathtaking natural wonders of Tunisia.

What Is Really Happening in Tunisia, Explained by Tunisians

Is it Safe to Travel in Tunisia?...