Djerbahood: 20 Incredible Works of Art on the Streets of Djerba8 min read 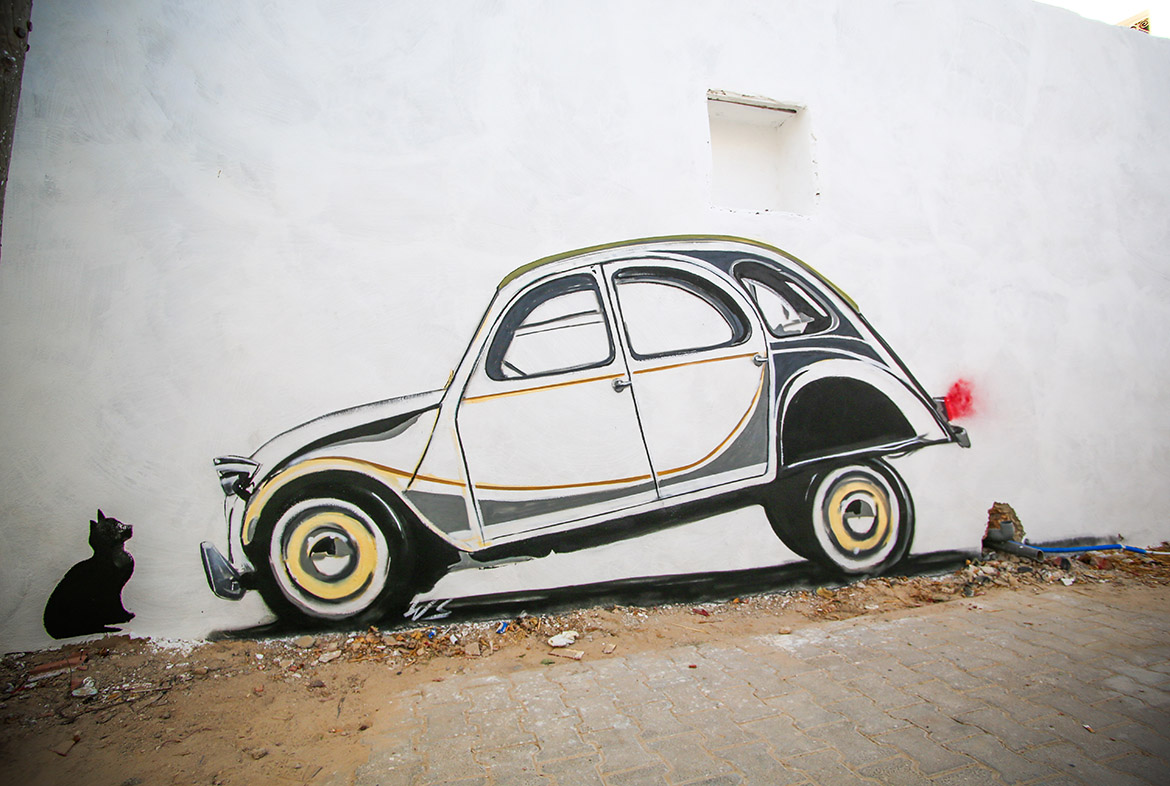 Djerbahood: Street and graffiti artists from all over the world gathered in the Island of dreams, Djerba, in a one of its picturesque and authentic villages, Erriadh, where they created the first open-air street art museum.

Hospitable locals opened their doors for a hundred of artists from thirty different nationalities who jazzed up the walls of the village with more than 250 artworks.

The project which was launched in 2014 by the Parisian la Galerie Itinerance specialized in street art showcases a variety of artistic styles that added to the beauty and quaint charm of Erriadh.

Old walls bursted into colour in harmony with the authenticity and local environment of the village and brought to that old-age city an additional aesthetic touch while preserving its traditional character.

Suggested Read: 10 Most Exciting ‘Live Like a Local’ Experiences & Things To Do in Djerba

Wandering along the small streets of Erriadh and striking a pose have become a ritual for tourists!

Here are bits of Djerbahood! The first picture made available by Phlegm. Phlegm painted in the searing heat in the village Erriadh. Invited for the Djerbahood project organized by Galerie Itinerrance. The British artist had fun experiments with placing windows and doors in old abandoned buildings he found hidden away in the back streets.

The next four pictures are made available by Mariusz Waras. He is better known as M-City, is an artist from Poland, whose large-scale stencils creates, imagined cityscapes inspired by impressions from his childhood in an industrial area. He contributed to the Djerbahood project.

The next painting is by Fintan Magee. He is an Australian street artist known for his murals throughout Australia and the world. He contributed to the Djerbahood project.

The next painting of this Citroen 2CV street art is brought to you by the Tunisian artist Wissem Soussi, also known as Wisign.

The next painting is by Zied Lasram, a Tunisian street artist. After a degree in Graphic Design and Visual Communication and a master’s degree in Museology, he devoted himself to being a multidisciplinary artist (painting, photography, installations) in 1998, and that has led him to exhibit both in Tunisia and abroad.

In Erriadh, by strolling around the village, you can find yourself face to face with street artworks made of hearts. These are the works of Sunra, a Franco-Tunisian street artist.

The next two pictures brought to you by Inkman. Mohamed Kilani Tbib, is a Tunisian graphic artist and calligrapher, working under the name of Inkman. He contributed as well to the Djerbahood open-air museum.

The following three pictures are made available by BRUSK member of Da Mental Vaporz Crew from France. BRUSK painted a couple of pieces for Galerie Itinerrance’s Djerbahood open air museum in the Erriadh village.

This paining is by the Spanish artist Sebastián Velasco Navarro, also known as Sebas Velasco. He painted this magnificent mural for the Djerbahood project.

The next two paintings are brought to you by Andrea Michaelsson. Andrea is a multi-faceted artist better known by her street artist name, Btoy. She was born in 1977 in Barcelona, Spain.

The next three pictures are brought to you by ROA. Renowned for his monumental black and white paintings of wildlife, ROA is a pseudonym of a Belgian street artist that has been leaving both accidental and intentional viewers in awe for years now. He contributed to the Djerbahood project in Erriadh village in Djerba, Tunisia.

Assidat Zgougou — Tunisia’s Sweetness in a...