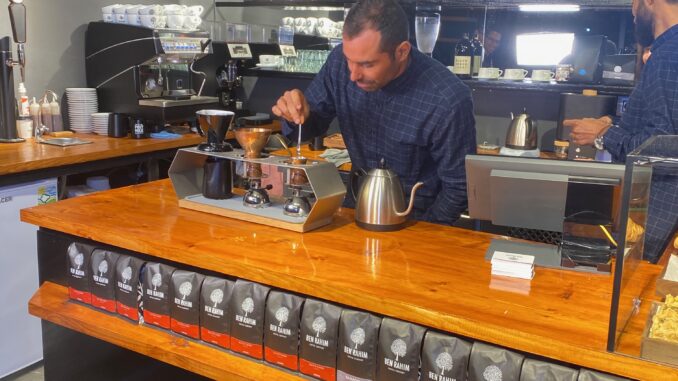 BEN RAHIM is the first-ever specialty café in Tunisia. It was opened early this year in Sidi Bousaid as an introduction to specialty coffee with an Arabian influence.

As the country’s first specialty coffee shop, it has the opportunity to promote new concepts to a country whose coffee culture is anchored in social gatherings and the making of Turkish cezve.

The Traditions of Tunisian Coffee Drinking

Numerous modest cafeterias in Tunisia are essentially social meeting places; coffee is secondary. There are also several newer shops called Salon de Thé, which translates to “teahouse” from the French. These cafes provide a range of coffee drinks, including iced beverages with cream, syrups, or various tastes.

As for the coffee itself, Tunisians traditionally prepare it at home or in a café using a Turkish cezve-ibrik, where they also enjoy the frothy capuchin beverage.

Where did the idea to create a specialty coffee store originate? The owner, Ben Rahim, who was born in Tunisia, and his German wife left the country in 2008. After a short stay in Germany, they relocated to Australia, where he developed a passion for coffee and a desire to one day operate his own store. In 2015, he launched a café in Berlin, where he and his family currently reside.

After developing the business in 2019, he began considering his next step: launching a second coffee shop in Tunis. Since then, it has been his desire to open a specialty coffee shop in his native nation, and he was thrilled to be among the first to accomplish so.

BEN RAHIM’s Tunis location finally opened its doors in February after months of battling structural issues, bureaucracy, and regulations (being in the historic Tunisian coastal suburb of Sidi Bou Said necessitates certain rules regarding how the shops should look to ensure they fit with the historic location).

BEN RAHIM café has a milk- and sugar-free attitude and offers the same menu as in Berlin, including high-quality Ibrik coffee and a pour-over brew bar. Despite being one of the few coffee shops in the neighborhood with indoor smoking regulations, they’ve managed to carve out a niche for themselves.

For the time being, the team at BEN RAHIM recognizes that their offerings will not appeal to everyone, but mainly black coffee enthusiasts and those who like to compare flavor profiles. Ben continues, “In the future, we intend to show more and more people that high-quality coffee doesn’t require sugar or other additives.” “If people experience our coffee, which is crafted by really competent baristas, we want to persuade them with the use of cuppings and contests.”

Suggested Rea: Get Caffeinated: Become an Authentic Tunisian with One Cup!

USI MEM Empowers the Next Generation of Young Change-Makers