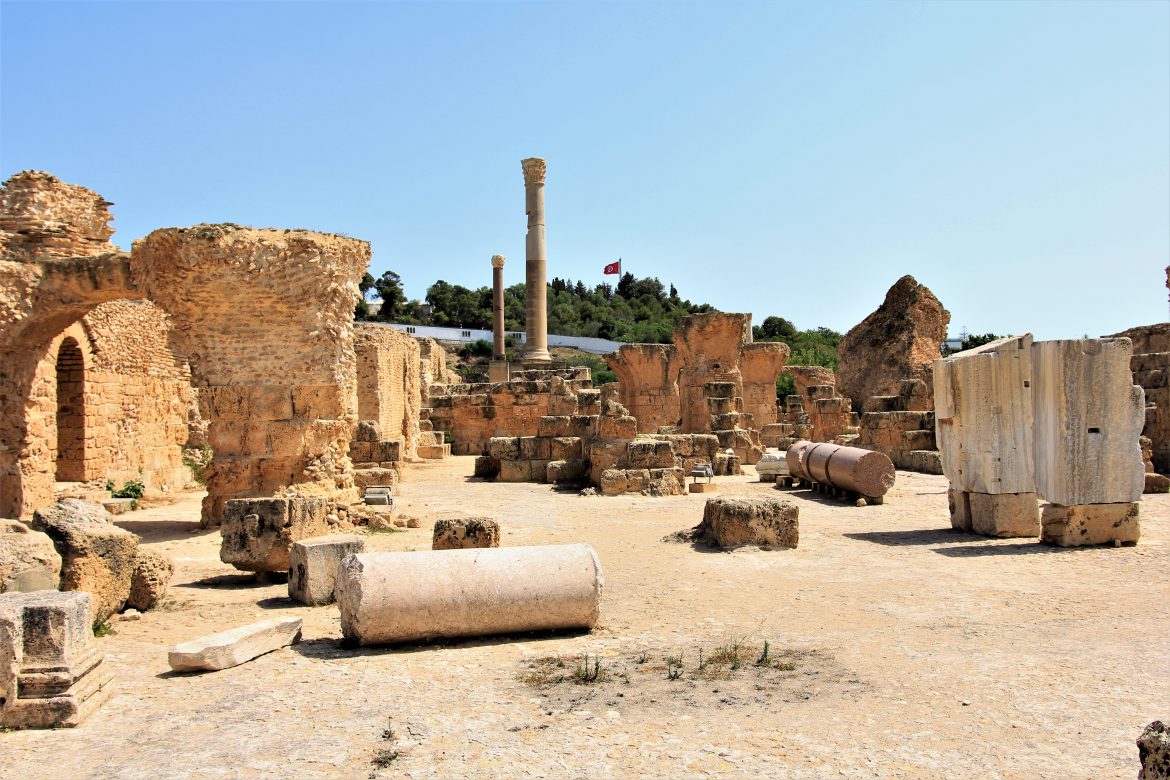 One of the biggest ancient bath complexes ever constructed, the ruins of the second century Antonine Baths are a real masterpiece to discover.

The Romans chose a magnificent coastal location for this massive bath complex, which is just a short walk downhill from the Roman villas. It was the largest bath outside Rome, supplied with water via the great Zaghouan Aqueduct. It was constructed under Hadrian and completed in the second century AD under Antoninus.

There are only the foundations remaining, yet they are massive in scale. A layout of the baths above the main complex can help you in imagining the complex’s operation during its heyday. The well-preserved ruins are indeed a famous UNESCO World Heritage Site.

Originally constructed between 145 and 165 AD, mostly during the reign of Roman Emperor Antoninus Pius, the Antonine Baths were one of the greatest bath complexes in the Roman world and the largest in North Africa.

The baths were large enough to accommodate a large number of guests and had a number of rooms and chambers typical of such ancient bath complexes, including the Frigidarium (cold room), Caldarium (hot room), and Tepidarium (hot bath). Additionally, there was previously a huge beachfront swimming pool and a Gymnasium for physical activities.

The Vandals destroyed the baths in 439 AD, and the Arabs reused the stone in the construction of Tunis. Today, the remains are surprisingly well kept, and the thriving landscape is easy to envisage.

Although the baths were once many floors high, the remnants visible now are mostly of the lower levels. Nonetheless, from what remains visible, it is not difficult to imagine the enormity and magnificence of the baths.

To the southwest, a large semi-circular structure with approximately 80 seats was discovered, which archaeologists initially confused for a theatre before finding it was actually a public latrine!

The magnificent ruins of the Antonine Baths are well worth exploring and are surrounded by natural beauty, with the lovely sea as a backdrop. Other ruins can be seen in the overgrown garden, including Punic graves and a small early Christian burial church with a mosaic floor.

Getting to the Antonine Baths

The baths are a breathtaking four-minute drive or a 25-minute walk from the center of Carthage through Route de La Goulette. Additionally, the neighboring Roman Theatre of Carthage, Carthage Roman Villas, and Kobba Bent el Rey are worth visiting.

Is it Safe to Travel in Tunisia?...