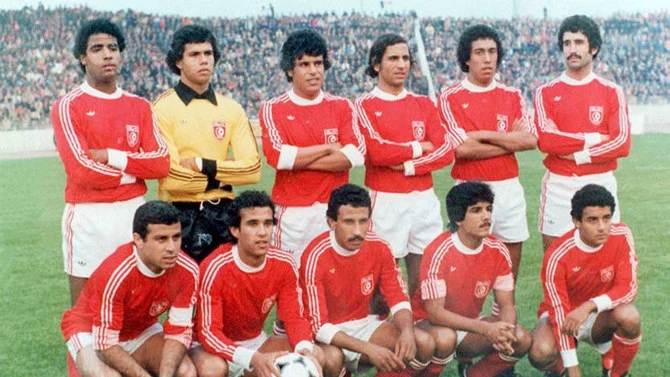 In 1974, Tunisia became the first Arab or African nation to win a World Cup game.

When Tunisia got in Argentina for the 1978 World Cup, no Arab or African team had ever won a match.

Egypt was the first team to compete in the 1934 World Cup in Italy, which was the second edition of the competition. Despite playing admirably against a formidable Hungarian team, Egypt lost 4-2 in questionable circumstances.

The task facing Morocco in 1970 was perhaps far more onerous. They, too, made a valiant effort, but were understandably unsuccessful.

In their initial encounter, they gained a surprise lead against a tough West German team that would later reach the semifinals, only to lose to two goals scored by the renowned duo Uwe Seeler and Gerd Muller. In their second match, they were defeated 3-0 by Peru, led by Teofilo Cubillas, but a 1-1 draw with Bulgaria sent them home on a rather upbeat note.

On 2 June 1978, Tunisia had the opportunity to break their duck. It would be an understatement to suggest that they were given little opportunities. In Group 2, they faced defending world champions West Germany, Poland, who had placed third in 1974, and, first up, a Mexican squad that had won the CONCACAF Championship the previous year and was expected to earn two early points with ease.

During a time when teams like Tunisia and others from Africa and Asia would enter the World Cup as utter unknowns, coach Abdelmajid Chetali had quietly assembled a formidable squad that was gaining steam.

Three months prior to the start of the World Cup, they had reached the quarterfinals of the Africa Cup of Nations before losing 1-0 to eventual champions Ghana. Possibly more illustrative of their developing pedigree was their success in qualifying for Argentina 78.

Tunisia had already defeated Morocco, Algeria, and Guinea in the first three rounds of CAF qualification to go to the final round robin group round alongside Egypt and Nigeria. This was a home-and-away series, and heading into the final match, Tunisia trailed Egypt by two points and needed to defeat the group leaders to qualify for their first World Cup. A draw would have marked Egypt’s comeback to football’s championship stage after a 44-year absence.

It appeared to be a difficult assignment for Tunisia, but they would pull off a trick that would become common in the coming months to anybody who had underestimated their powers.

The 4-1 victory at Stade Olympique El Menzah in Tunis on December 11, 1977 is now part of the mythology of Tunisian soccer. Future opponents should have been forewarned by the overwhelming strength and diversity of their performance against an Egyptian squad who defeated them 3-2 in Cairo just two weeks prior.

Even if the Mexicans had viewed a video recording of the game, they would not have paid much attention. On that historic day, Tunisia played a football style that foreshadowed what was to come.

On their World Cup debut in Argentina, however, things did not go as planned. At Estadio Gigante de Arroyito in Rosario, Tunisia began hesitantly, as if they were very aware of their status as the underdog. And when Mexico’s captain Arturo Vazquez Ayala scored a penalty kick shortly before halftime to give his team the lead after Amor Jebali handled the ball, the game appeared to be following the expected script.

Regardless of what Chattel remarked at halftime, Tunisia undoubtedly produced its best 45 minutes of football to that moment. And what had been a burden on the players’ shoulders during the first half was abruptly and triumphantly laid aside.

The Mexicans had no idea what had hit them as Tunisia, led by the outstanding Tarak Dhiab, dismantled them with a magnificent performance of one-touch counterattacking football.

Ali Kaabi, at the culmination of a fluid move on the outskirts of the Mexican penalty area, fired a low effort past goalkeeper Jose Pilar Reyes to level the score after 55 minutes.

The Tunisians were dominant, yet for twenty-five minutes the outcome was in doubt.

Nejib Ghommidh finished beautifully to give Tunisia a valuable lead with 10 minutes remaining, the goal scorer famously receiving a kiss from a photographer behind the goal while the game was being shown live on television.

In the 87th minute, another Tunisian defender, Mokhtar Dhouib, rushed into the penalty area and blasted the ball into the top of the net for a 3-1 victory that made history.

Tunisia had just won the World Cup for the first time by an Arab or African nation, and in their very first attempt.

Despite the fact that West Germany and Poland had played to a scoreless tie the day prior, Tunisia surprisingly led their group after the first round of games.

They were now able to fantasize about an even greater prize, qualification for the second round, which a few hours ago would have been seen as absurd.

Unfortunately, the victory versus Mexico would not be repeated, but Tunisia’s courageous performance was not diminished.

As in their first match, Tunisia conceded just before halftime, this time due to a terrible miskick by Kaabi that allowed Lato to score from close range.

Lahzami volleyed past Jan Tomaszewski in the Polish goal, but the ball hit the crossbar and rebounded into the goalkeeper’s arms, denying the World Cup of one of its finest goals ever.

Incredulous, the captain raised his arms to the sky.

Despite a flurry of late near misses for Tunisia, Poland hung on for a victory that they could not have believed would be so difficult when the draw was created.

Tunisia could still go to the next round if they defeat the West German squad of Sepp Maier, Bertie Vogts, Rainer Bonhof, and Karl-Heinz Rummenigge.

In spite of being the defending champions, Helmut Schon’s squad was a ghost of the Franz Beckenbauer-led squad that had won the title against the Netherlands four years prior. In hindsight, a Tunisian victory may not have been as miraculous as it seemed at the time.

In addition, they came close, but a final score of 0-0 was not sufficient for a top-two finish in the group and advancement to the second group round.

Their historic exploits in Argentina would pave the way for Algeria, Morocco, and Saudi Arabia to achieve legendary victories in future World Cups.

The Eagles of Carthage may have fallen short, but Chetali, Dhiab, and the rest of Tunisia’s Golden Generation have ensured their names will live on in African and Arab football lore.

What Surprises Tunisians When They Visit the...